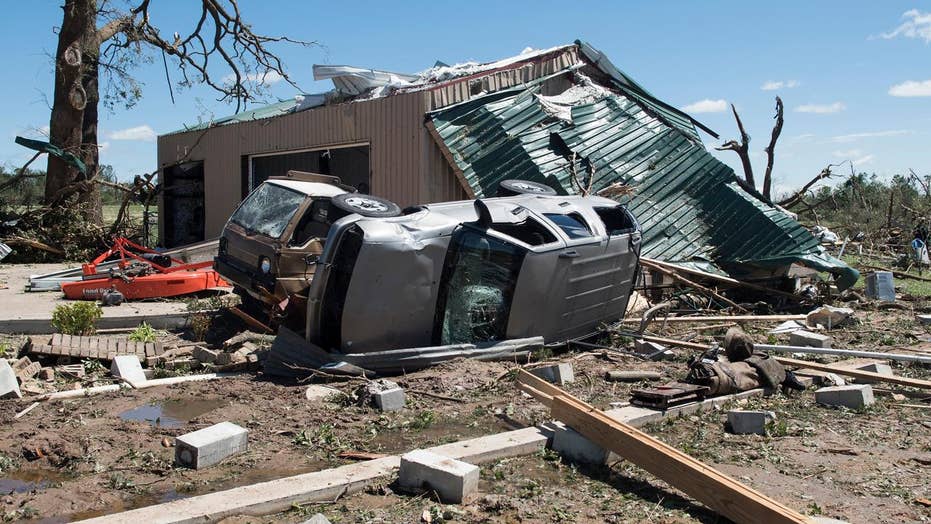 Will Carr reports from Canton, Texas

Parts of the Midwest and South are spending Monday cleaning up from weekend storms that brought isolated tornadoes and flooding that killed at least 15 people, while a chance remains for more severe weather across the region.

The National Weather Service said parts of the parts of the Florida Panhandle, Alabama, Georgia and Mississippi could be affected by severe thunderstorms as the day goes on.

Tornadoes hit several towns in East Texas late Saturday, killing four people. Survey teams will return to Van Zandt and Henderson counties Monday to look at damage from the Two EF3 twisters with wind speeds of up to 165 miles per hour that touched down, FOX 4 reported. There were also two EF0 tornadoes in the area.

Thousands of homes and businesses were damaged or destroyed from the four tornadoes, and four school districts are closed on Monday because of the storms, according to FOX 4.

In Canton, students from  Edgewood High School students were supposed to be celebrating pom but found themselves crammed into a bathroom for safety as the tornado passed by.

Dallas firefighter Reagan Sumner, who owns the Rustic Barn event space in Canton told FOX 4 he watched his practically new venue and dreams of retirement collapse around him.

“There was people screaming and crying but there was so much noise when the building started collapsing," he said. "It was like I could see them crying and screaming but I couldn’t even hear them."

Sumner said he’s still in shock but thankful that no one in the barn was hurt by the storm.

At least five people were killed in neighboring Arkansas from flooding and winds caused by the storm system, including a fire chief who was struck by a vehicle while working during the storm.

Rescuers in northwest Arkansas said the search for an 18-month-old girl and a 4-year-old boy who were in a vehicle swept off a bridge by floodwaters in Hindsville is now a recovery mission, FOX 16 reported.

Elsewhere in the state, a 10-year-old girl drowned in Springdale and the body of a woman who disappeared riding an inner tube Saturday was found in a creek in Eureka Springs. Also, a 65-year-old woman in DeWitt in the eastern part of the state was struck and killed in her home by a falling tree, officials said.

Cove Creek/Pearson Fire Chief Doug Decker died shortly before 4 a.m. Sunday after being struck by a vehicle while checking water levels on Highway 25 near Quitman, about 40 miles north of Little Rock, Trooper Liz Chapman said. It wasn't known if he will be included as a storm-related death, she said.

Futher noth in Missouri, two deaths were reported, including a woman who drowned after rushing water swept away a car. Flooding closed part of Interstate 44 near Hazelgreen, Missouri, and officials expected it would be at least a day before the highway reopened. Officials may also have to close Interstate 55 at the Meramec River due to flooding, FOX 2 St. Louis reported.

Near Clever in southwestern Missouri, a man tried to save his 72-year-old wife from floodwaters that swept away their vehicle Saturday, but her body was found when the water receded, the Missouri State Highway Patrol said.

The storm system moved through Louisiana, Mississippi and Alabama on Sunday with strong winds causing isolated pockets of damage.

One of two deaths in Mississippi included a 7-year-old who died by electric shock and a 2-year-old girl died in Tennessee after being struck by a soccer goal post thrown by heavy winds.

In Durant in central Mississippi, one person died in the storms. The Mississippi Emergency Management Agency didn't give details. Later Sunday the agency reported the death of a child from Rankin County, 20 miles east of Jackson, who died from electric shock in flood waters. The Rankin County Sherriff's Department reported that a 7-year-old boy had unplugged an electric golf cart and dropped the cord in water on the ground and was shocked.

Alexa Haik told the Associated Press she went to bed Saturday night expecting just rain, but heard the sirens Sunday morning and turned on the television to see the tornado warning. She rounded up her pets and hid in a hallway with her family, then was stunned to emerge to trees down in her neighborhood in Clinton, Mississippi, about 20 miles  west of Jackson.

A trip up the road showed how isolated the worst of the storms were.

"I really thought when we got out of our neighborhood, there would be damage everywhere. But our little subdivision was the only one hit," Haik said.

A 2-year-old girl in Tennessee died after being struck by a heavy, metal soccer goal post that was blown over by high winds, The Metro Nashville Police Department posted on its Twitter page Sunday evening. Melanie Espinoza Rodriguez was transported to a local hospital where she was pronounced dead, according to a second post from the department.