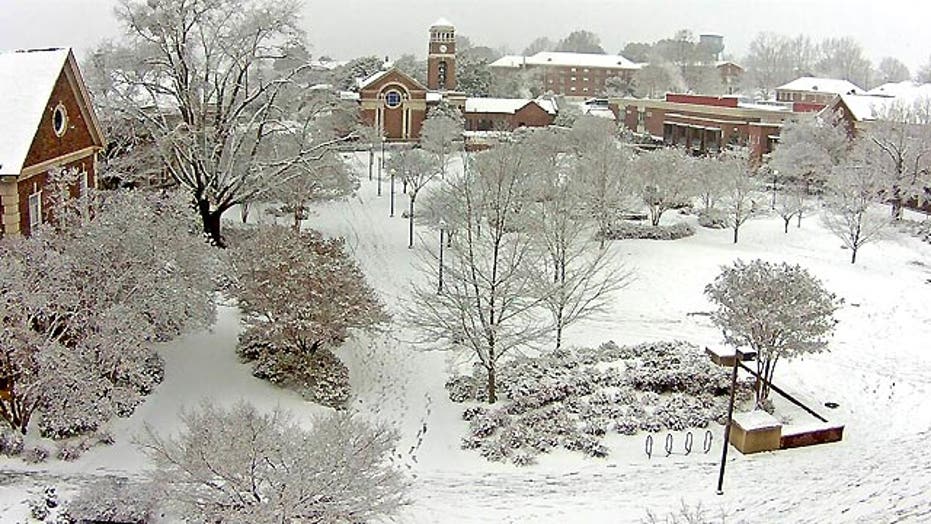 A menacing winter storm barreled across the southeastern U.S. on Wednesday, dumping a half foot of snow, sleet and freezing rain on a territory ranging from Texas up through southern Virginia.

The National Weather Service issued a winter storm warning for much of metro Atlanta and northern Georgia, with Gov. Nathan Deal declaring a state of emergency through early Thursday afternoon, MyFoxAtlanta.com reported. Some schools were closed and even an execution was delayed as residents and officials braced for as much as eight inches in some mountainous areas.

Deal said Wednesday that he was confident in the state's ability to handle the inclement weather, and said hard lessons had been learned from last year's brutal ice storm that shut down transportation in the area for several days.

Annalyce Baker, a spokeswoman for the state's department of transportation, told FoxNews.com that plow crews were already on the roads as of 5 p.m., and that more salt and gravel was available compared to last year. She added that three dozen ground sensors have been added to major interstates to better help authorities alert travelers to impassable thoroughfares.

The bad weather also led Georgia to delay the execution of its only female death row inmate. Kelly Renee Gissendaner, 46, had been scheduled to die at 7 p.m. Wednesday for the 1997 killing of her husband, but her execution has been rescheduled for Monday.

Meanwhile, in Alabama, Josie Hicks fretted about the safety of her 3-year-old daughter and 4-year-old son in her home in Etowah County, located about 55 miles northeast of Birmingham.

Hicks said the pipes already were frozen at the family's apartment in Attalla, and she was worried the power could go out. So with sleet already bouncing off car hoods outside, Nicks made a quick trip to Walmart for milk, bread and other food that didn't have to be cooked, and 1-gallon jugs of water.

"I wouldn't mind having some snow for the babies to play in, but I don't want them to be freezing," said Hicks. "I'm worried about my babies being warm."

The manager of a sandwich shop in Shreveport, Louisiana, says it's been delivering more food this week because of the bad weather.

"The first question asked when you answer the phone is 'Are you delivering?'" according to Alli Walsh, who manages a Jimmy John's in Shreveport.

Walsh said she has up to six delivery workers who are running multiple orders at a time. Shreveport could get up to 3 inches of snow.

Meanwhile, the National Guard was deployed throughout Virginia to help with disaster response.

Temperatures in the southeast were reported to be as much as 30 degrees below average for this time of the year, but forecasters said the fact that they were hanging in the mid-30s would help roads thaw. Farther north, however, bitter temperatures shattered records for two days in a row at Dulles International Airport in suburban Washington, D.C.

Steve Zubrick, a National Weather Service meteorologist, told FoxNews.com that the temperature dipped down to 6 degrees Wednesday morning, beating the previous record of 9 degrees in 1967. The day before, the low of minus 4 shattered the previous record of 14 degrees, also set in 1967. And Baltimore's airport came within 2 degrees of its record lows on Tuesday and Wednesday.

Andrew Orrison, a National Weather Service meteorologist, told FoxNews.com Wednesday afternoon that the snowfall would begin to taper off in the southeast Thursday morning. He added that this week's winter blast, while unpleasant for an area typically spared from major snowfall, was not uncommon for this time of the year.

“It had been pretty mild for the most part across most of these areas for most of the winter,” he said. “It took a while, but now we’ve had a lot of snow and cold temperatures over the last month, so that kind of made up for what was lacking earlier in the winter.”

And at least this round of winter misery was picking on a new region of the country for a change.

"The good news," Orrison said, "is that this storm is going to stay away from Boston."