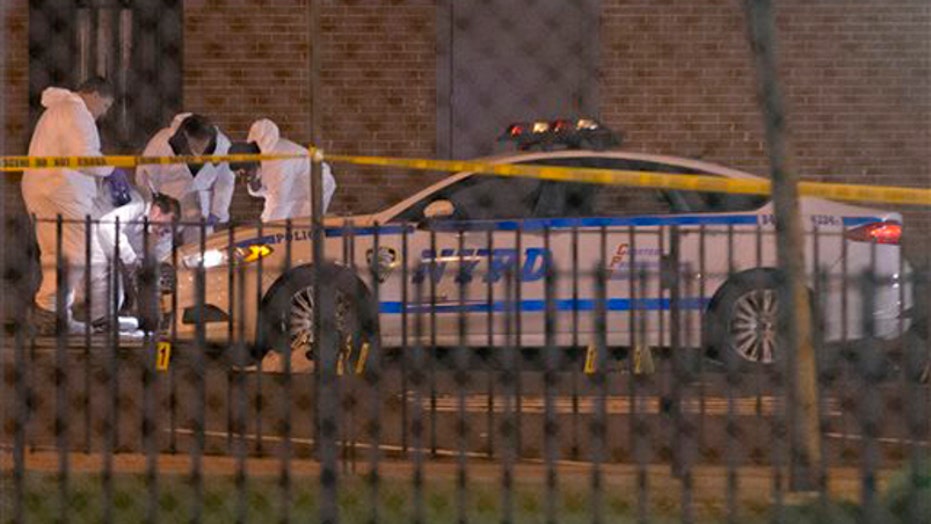 Reaction to the fatal shooting of two New York City police officers on Saturday by a gunman who, according to authorities, announced online that he was planning to shoot two "pigs" in retaliation for the police chokehold death of Eric Garner.

"They were, quite simply, assassinated -- targeted for their uniform and for the responsibility they embraced to keep the people of this city safe."

"We depend on our police to protect us against forces of criminality and evil. They are a foundation of our society, and when they are attacked, it is an attack on the very concept of decency."

"Our nation must always honor the valor -- and the sacrifices -- of all law enforcement officers with a steadfast commitment to keeping them safe. This means forging closer bonds between officers and the communities they serve."

"There is blood on many hands, from those that incited violence under the guise of protest to try to tear down what police officers do every day. That blood on the hands starts at the steps of City Hall, in the office of the mayor."

"As we continue to investigate these senseless acts of violence against two of our city's heroes, we pray for peace, support the men and women who bravely patrol our streets every day, and mourn for the loss of these two police officers who gave their lives to keep us safe."

"These brave officers, along with the over 34,000 other uniformed men and women of the New York Police Department, put their lives on the line every day to keep our communities safe. They run toward danger when all of our instincts tell us to run away.

"It is ... time for elected officials to stand by the men and women of law enforcement and end the demeaning of police officers and grand juries."

"We have stressed at every rally and march that anyone engaged in any violence is an enemy to the pursuit of justice for Eric Garner and Michael Brown.'

We reject any kind of violence directed toward members of law enforcement.  It cannot be tolerated. We must work together to bring peace to our communities.

-- The family of Michael Brown

"Gun violence continues to plague our city and we remain committed to working with both members of the community and law enforcement to address it in a nonviolent, peaceful, and productive way."