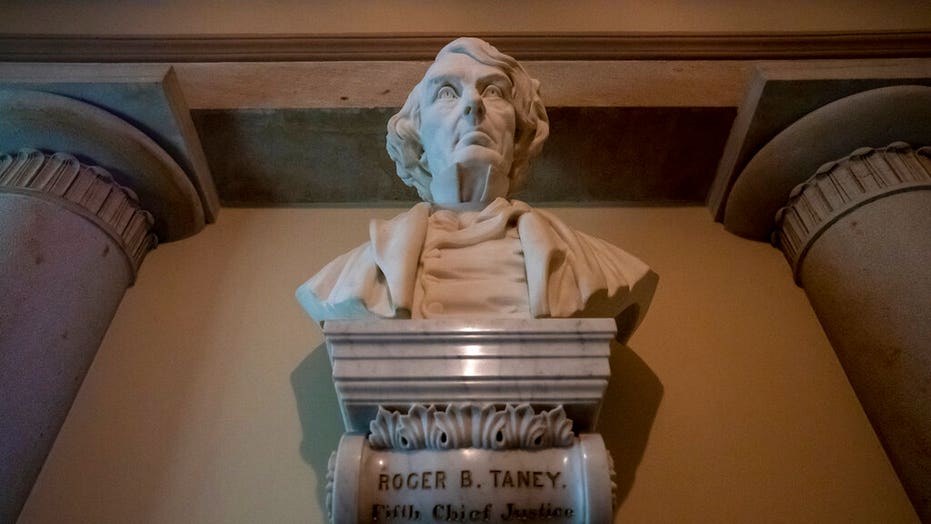 The House of Representatives debated a plan Wednesday to remove four statues of historical figures from the Capitol who “voluntarily served the Confederate States of America.”

Among the most hotly contested statues is that of the late Chief Justice Roger Taney, who authored the Dred Scott decision in 1857 that ruled Black people could not become U.S. citizens.

Marble bust of Chief Justice Roger Taney is displayed in the Old Supreme Court Chamber in the U.S. Capitol in Washington. The House will vote Wednesday, July 22, on whether to remove from the U.S. Capitol (AP)

The bust of Taney is located at the Old Supreme Court Chamber inside the Capitol. The bill proposes to replace him with a bust of the late Supreme Court Justice Thurgood Marshall, the court's first African American justice.

Although the measure will likely pass in the Democrat-controlled House, removing such statues from the overall Capitol collection requires Senate action, and as it stands, there is no plan set forth for the Republican-controlled chamber to consider any similar measures.

HOUSE TO VOTE WEDNESDAY ON REMOVING CONFEDERATE STATUES FROM CAPITOL

House Majority Leader Steny Hoyer, D-Md., who co-wrote the bill, said in a press conference before the debate, "I prayerfully anticipate that we can come together..to reject hatred and racism and to make it clear..that statues of these individuals have no place in our campus."

Rep. Karen Bass, D-Calif., invoked the memory of her Congressional colleague and civil rights activist, the late John Lewis, who died on Friday, and said "what he fought for every day is the exact opposite of these symbols"

"Personally as a Black lawmaker, the presence of these statues represents an acceptance of white supremacy and racism," Bass told lawmakers.

Rep. George Butterfield, D-N.C., called the Dred Scott decision "arguably the worst opinion that the Supreme Court of the United States has ever handed down."

The statues of former Vice President John C. Calhoun, who was a fierce advocate and proponent of slavery, former North Carolina governor Charles B. Aycock, and former Rep. John C. Clarke who also fought against freeing slaves, are other busts that Congress is considering removing from the Capitol.

One unlikely defender of keeping Taney's statue in the Capitol is Rep. Lynne Jackson, Scott's great-great-granddaughter, who says if it were up to her, she'd leave Taney's bust where it is. But she said she’d add something too: a bust of Dred Scott.

“I’m not really a fan of wiping things out," Jackson said in a telephone interview this week from her home in Missouri, according to the Associated Press.