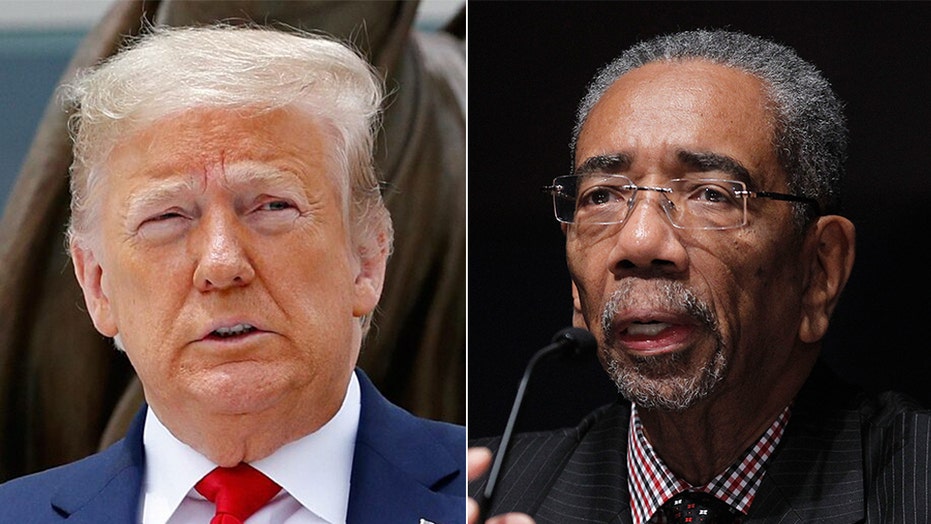 Democratic Rep. Bobby Rush on Wednesday accused President Trump of wanting to “instigate a race war” so he could say he was the “grand wizard of the Klu Klux Klan [sic].”

"That's Trump's game plan. Trump wants to instigate a race war,” the Illinois Democrat claimed during an appearance on “The Joe Madison Show” on SiriusXM Wednesday morning. “So he can rise up and say, 'I'm the real grand wizard of the Klu Klux Klan [sic] and I'm the President. Reelect me.' That's what he's trying to do.

“He's trying to play to the fears, to the racial animus that exists among certain White people, and he will do everything and anything to do that, because he wants to be reelected at all costs,” Rush continued.

Rush, who represents Chicago, made the remarks after radio host Joe Madison asked him about federal law enforcement agents potentially being deployed to his city to quell unrest and violence.

Last month, amid criticism of the president’s handling of mass protests following the death of George Floyd, Rush called Trump the “worst thing to happen to the American presidency.”

“He is the worst president, including ... Andrew Johnson,” Rush said on CNN.

The Democratic congressman, who founded the Illinois Black Panthers, has a history of making provocative comments, including last month, when he likened Chicago’s police union to the KKK.

“The Chicago Fraternal Order of Police is the most rabid, racist body of criminal lawlessness by police in the land. It stands shoulder to shoulder with the Ku Klux Klan then and the Ku Klux Klan now,” he told Politico. He said the Chicago FOP and the KKK “are like kissing, hugging and law-breaking cousins.”

On Tuesday night Chicago Mayor Lori Lightfoot said she would not allow Trump to send in federal forces to “terrorize” her city, just as a mass shooting wounded 15 at a funeral home in Chicago’s South Side.

“Under no circumstances will I allow Donald Trump’s troops to come to Chicago and terrorize our residents,” Lightfoot said.

On Monday, Trump had vowed to send federal forces to the city.

That same day, Lightfoot told MSNBC she would not allow “tyranny” in Chicago – a reference to controversial tactics used by federal agents sent into Portland, Ore., to quell rioting – but admitted Tuesday the city would be working “collaboratively” with the FBI, Drug Enforcement Administration and the Bureau of Alcohol, Tobacco, Firearms and Explosives to bring down violent crime, the Tribune reported.

Trump is expected to announce Wednesday that he will expand the Justice Department’s "Operation Legend" program to Chicago and Albuquerque.

The president is expected to make the announcement during a "law and order" event Wednesday afternoon at the White House, where he will detail the ongoing work of “Operation Legend” in Kansas City.

Attorney General Bill Barr announced the launch of “Operation Legend” earlier this month in an effort to combat violent crime in Kansas City. The program was named after LeGend Taliferro, a 4-year-old boy who was fatally shot last month while sleeping in his Kansas City apartment.

The Department of Justice said the operation is meant to curb a spike in violent crime in the city, where there have been more than 100 homicides this year.