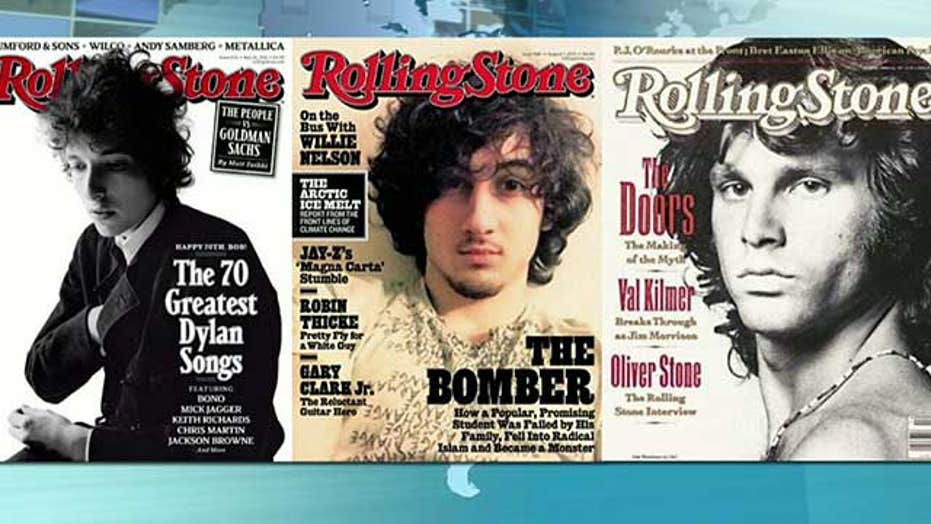 At least five retailers with deep ties to New England will not sell the Rolling Stone magazine featuring an unsmiling, scruffy Boston Marathon bombing suspect Dzhokhar Tsarnaev on its cover.

The picture, which accompanies a story titled "Jahar's World," shows the 19-year-old accused murderer with his long, curly hair tousled, reminiscent of the magazine's iconic shots of rock 'n' roll royalty like The Doors' Jim Morrison and Bob Dylan.

The issue — which hits newsstands Friday — depicts Tsarnaev above a boldface headline, "The Bomber." The story, which features interviews from childhood friends, teachers and law enforcement agents, promises to reveal how a “popular, promising student was failed by his family, fell into radical Islam, and became a monster."

Several notable retailers, including CVS and Walgreens, have decided not to carry the issue in their stores.

“CVS/pharmacy has decided not to sell the current issue of Rolling Stone featuring a cover photo of the Boston Marathon bombing suspect,” the Rhode Island-based pharmacy chain said in a statement. “As a company with deep roots in New England and a strong presence in Boston, we believe this is the right decision out of respect for the victims of the attack and their loved ones.”

Other retailers who have said they will not carry the issue include Walgreens, Rite Aid, Stop & Shop, the grocery chain the Roche Bros and Tedeschi Food Shops, a Massachusetts-based convenience store chain.

Other critics of the cover, including Boston Mayor Tom Menino and Massachusetts Gov. Deval Patrick, struck fast, accusing the magazine of offering Tsarnaev “celebrity treatment” and calling the cover “ill-conceived, at best" in a letter written by Menino to Rolling Stone publisher Jann Wenner.

"The survivors of the Boston attacks deserve Rolling Stone cover stories, though I no longer feel that Rolling Stone deserves them,” the letter concluded.

Rolling Stone, for its part, issued a statement Wednesday saying the story was part of its “long-standing commitment to serious and thoughtful” coverage of the most important current political and cultural issues.

"The fact that Dzhokhar Tsarnaev is young, and in the same age group as many of our readers, makes it all the more important for us to examine the complexities of this issue and gain a more complete understanding of how a tragedy like this happens," the statement said.

Rolling Stone did not address whether the photo was edited or filtered in any way in a brief statement offering condolences to bombing survivors and the loved ones of the dead.

In a blog posting late Tuesday, Rolling Stone detailed “five revelations” in the story by contributing editor Janet Reitman, including Tsarnaev's increasing devotion to Islam while still in high school, as well as his older brother Tamerlan Tsarnaev's possible mental illness, which the boys' mother decided would be better treated by Islam than by a psychiatrist.

"Around 2008, Jahar’s older brother Tamerlan confided to his mother that he felt like ‘two people’ were inside him,” the blog posting reads. “She confided this to a close friend who felt he might need a psychiatrist, but Zubeidat believed that religion would be the cure for her son’s inner demons and growing mental instability, and pushed him deeper into Islam.”

But the cover could send a dangerous message to Tsarnaev's warped supporters, according to one critic.

Putting convicted and alleged criminals on the covers of major magazines is justified if they are major news figures, according to Samir Husni, a journalism professor who heads the Magazine Innovation Center at the University of Mississippi. It's digitally manipulating a photo that never is, Husin said.

"They'll probably regret it later," he said of Rolling Stone's handling of its cover. "Even if it wasn't doctored it's going to bring those negative reactions."

Supporters of Tsarnaev, who believe in the face of overwhelming evidence that he’s innocent of the charges against him, appeared last week during his federal court appearance in Boston. Some wore T-shirts with phrases like “Free the Lion,” while others held “Free Jahar” signs outside Boston's John Joseph Moakley United States Courthouse on Wednesday.

“Give Dzhokhar back his life,” one protester reportedly said.

“If you really cared about the victims you would be more interested in the truth,” said another Tsarnaev supporter.

"Very rarely does something make me so mad I have a negative tweet, but #BoycottRollingStone," one user posted early Wednesday. "Absolutely unacceptable."

Many other Twitter users indicated they would never purchase another Rolling Stone magazine.

"Way to glorify a madman," another posting read.

The issue also drew condemnation from at least one of Tsarnaev's alleged victims.

MBTA Transit Police Officer Richard "Dic" Donohue, who was allegedly shot and injured by the Tsarnaev brothers as they fled police, said in a statement he and his family felt the issue was "thoughtless at best."

"I cannot and do not condone the cover of the magazine," Donohue said.

Federal authorities allege that the Tsarnaev brothers planted two bombs near the finish line of the Boston Marathon on April 15. The explosions killed three people and injured more than 260 others.

Four days later, Dzhokhar Tsarnaev, who survived a shootout with police during which Tamerlan Tsarnaev was killed, was captured following a day-long manhunt in the Boston suburb of Watertown.

Tsarnaev pleaded not guilty last week to 30 counts of a federal indictment. If the government decides to seek capital punishment, Tsarnaev could face the death penalty if convicted on one of 17 counts.

Rolling Stone’s statement was little consolation for James "Bim" Costello, 30, of Malden, Mass., who needed pig skin grafts on most of his right arm and right leg after the bombing. His body was pebbled with shrapnel, including nails he pulled out of his stomach himself. Three of his close friends lost legs that day and others suffered serious burns and shrapnel injuries.

"I think whoever wrote the article should have their legs blown off by someone," struggle through treatment "and then see who they would choose to put on the cover,” Costello told The Associated Press.

The accompanying story, he said, "just seems like a cry for attention" from Rolling Stone.