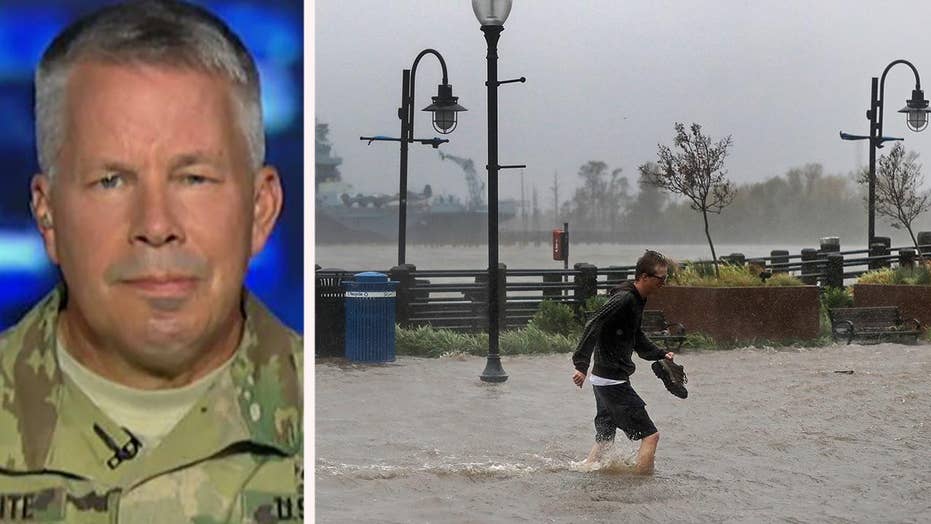 US Army ready to help with Florence recovery efforts

Military focuses on addressing flood water risks as Florence slowly moves across the Carolinas; insight from the U.S. Army Corps of Engineers on 'Fox & Friends.'

A reporter from a local ABC station was in the middle of a Facebook Live video on Friday when she stopped her broadcast to help rescue a dog caught in floodwaters from Hurricane Florence.

WTVD’s Julie Wilson was in the middle of the Facebook Live video in New Bern, North Carolina, when she saw a woman struggling to save a dog, a Rottweiler, from the deep water. The dog had been injured.

Wilson continued her live stream of the storm’s damage when she saw the woman having difficulty steering the dog through the water. Wilson asked the woman if she could pick up the dog.

"Can we pick this one up?" Wilson asked the woman. The reporter gave the woman the camera and carried the dog.

“You are OK, baby girl,” Wilson told the dog.

“Nobody is leaving the dog in this mess," Wilson said. "That’s what we are doing out here.”

The woman thanked the reporter for her help.

Wilson later explained what happened and why she jumped into action. She explained the dog was the woman's son's therapy dog.

Hurricane Florence has been downgraded to a tropical storm and has weakened on Saturday since it made landfall on Friday. The storm has been blamed for at least six deaths.