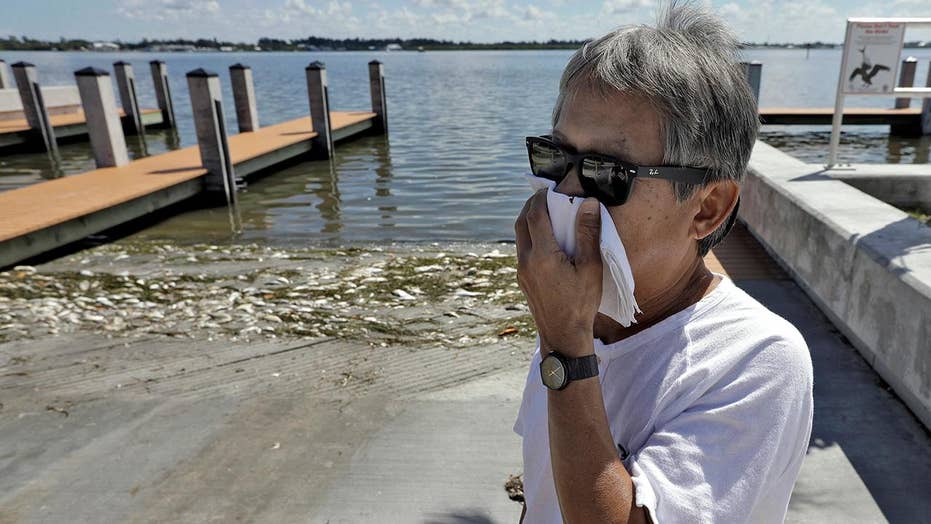 A blanket of red tide along Florida's Gulf Coast that's killing marine life in addition to emptying normally packed beaches with an unrelenting stench has caused the state's governor to declare a state of emergency for parts of the region.

“As Southwest Florida and the Tampa Bay area continues to feel the devastating impacts of red tide, we will continue taking an aggressive approach by using all available resources to help our local communities," Scott, a Republican, said in a statement. "I am issuing an emergency declaration to provide significant funding and resources to the communities experiencing red tide so we can combat its terrible impacts."

Scott said he's ordering $100,000 for additional scientists to help with clean-up efforts and another $500,000 to help local communities and businesses struggling with lost income as tourists flee. The governor also directed another $900,000 in grants to help Lee County's clean-up efforts.

From Naples in Southwest Florida, about 135 miles north, beach communities along the Gulf coast have been plagued with red tide. (AP Photo/Chris O'Meara)

Red tide — a naturally occurring toxic algae bloom that can be harmful to people with respiratory problems — has spread throughout the region since October and stretches about 150 miles from Naples to Anna Maria Island.

The algae turns the water toxic for marine life, and in recent weeks beachgoers have discovered turtles, large fish, and even manatees washed up dead. In Sarasota County, 11 dead dolphins have been found and marine biologists are investigating if their deaths are linked to red tide, according to FOX13.

"The fact that we just aren't seeing them and that they're not in the area anymore shows just how bad of a problem it is," he said.

The Florida Wildlife Research Institute says the number of dead and stranded sea turtles this year is nearly three times higher than average. More than 450 stranded and dead sea turtles have been recovered in four affected counties, and the institute estimates that 250 to 300 died from red tide poisoning.

In Sarasota County, officials said Friday that since Aug. 1 they have removed more than 66 tons of fish from county beaches. The stench from the fish is making it miserable for residents and tourists to be by the water.

"I can't describe the smell. It's like unbelievable. It makes you throw up," Holmes Beach resident Alex Kuizon told the Associated Press. Kuizon, who has lived in the area for decades, had to hold  a handkerchief over his mouth and nose while talking to a reporter, according to the AP.

In this Monday Aug. 6, 2018 photo, Alex Kuizon covers his face as he stands near dead fish at a boat ramp in Bradenton Beach, Fla. (AP Photo/Chris O'Meara)

Officials are now trying to figure out why this year's red tide is so intense. Some researchers have noticed aggressive blooms after hurricanes; Irma swept past Florida's Gulf Coast in the summer of 2017 and a period of red tide affected Florida after the powerful 2004-2005 hurricanes.

Growing anger over the large death of marine life drew hundreds to a protest in Fort Myers on Saturday about the state of the waterways.

"There’s just too much death and destruction," protestor Robin Adams told FOX4. "I feel terrible that I moved my family here."

In this Monday Aug. 6, 2018 photo, dead fish are shown near a boat ramp in Bradenton Beach, Fla. (AP Photo/Chris O'Meara)

Adams, who moved from Pennsylvania to the Fort Myers area and named her daughter Marina out of love for the ocean, said the amount of dead fish washing up from red tide along beaches and algae in Lake Okeechobee has made her question the move.

“[Marina] wants to move back to Pennsylvania… she says, ‘Mommy the creatures aren't dead there like they are here,'" she told FOX4.