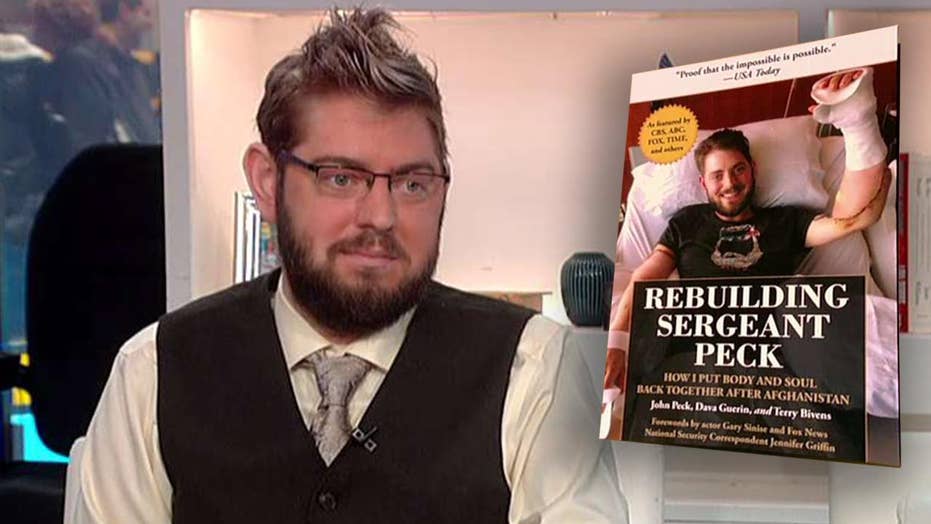 Retired Marine Sgt. John Peck opens up on 'Fox &amp; Friends' on his war wounds, double arm transplant and how he put his body and soul back together after stepping on an IED in Afghanistan. The book is forwarded by Fox News national security correspondent Jennifer Griffin.

The Marine who lost all of his arms and legs following an IED explosion in Afghanistan has told Fox News that something he saw outside his window one day helped him overcome his battle with depression – and set him on the right path to recovery.

Retired Marine Sgt. John Peck, in an interview with ‘Fox & Friends’ Friday, said he was in a rough place mentally after returning home to the U.S. following the injuries he suffered in 2010.

“From there I just started to open up to my physical and occupational therapist."

John Peck during his recovery after losing both of his arms and legs in an explosion in Afghanistan. (Courtesy Brigham and Women’s Hospital)

Peck, who has gone on to receive a rare double-arm transplant, is writing about his road to recovery in the soon-to-be-released book “Rebuilding Sergeant Peck: How I Put Body and Soul Back Together After Afghanistan”.

The book’s foreword is co-written by Fox News National Security Correspondent Jennifer Griffin, who met Peck years ago at a Gary Sinise concert and whose family has been following his story ever since.

“He’s changed my entire family’s life. We would not be the same without knowing John Peck,” Griffin told ‘Fox & Friends.’ “Whenever we hit a bump in the road, I say ‘you know, let’s think about what other people have gotten through’.”

Peck says in 2007, he was conducting a night patrol in Iraq and was heading back to base when the lead vehicle he was in struck an IED.

Peck was wounded in Iraq in 2007, but the injuries didn't stop from him re-enlisting and serving in the Marines. He was deployed to Afghanistan years later. (Courtesy Brigham and Women's Hospital)

The injuries he suffered in that incident caused him to lose 21 years of memory, including his own name. Peck then returned home to the U.S. for treatment and after two years of therapy, re-enlisted and was deployed to Afghanistan, where he stepped on another IED in May 2010.

“I’m pretty good at finding them apparently, but in the wrong way,” Peck told ‘Fox & Friends’. “I immediately lost my right arm just above the elbow, my left arm was amputated just below the forearm… I lost too much blood.

The period following that event, Peck says, was marked with depression. His then-wife also left him, but after witnessing the scene outside the window and undergoing more therapy – Peck found love, re-married and received the double-arm transplant in 2016.

Peck told ‘Fox & Friends that’ the “long, grueling surgery” lasted around 16 hours and involved more than 20 doctors shuffling in and out of the operating room.

Peck is now a motivational speaker, and as he continues his recovery, aspires to become a chef.

“My doctors are definitely scared about that,” he joked on ‘Fox & Friends’. “I am able to hold a knife and they are scared that I’m going to chop off a finger but one of my nurses, he’s like ‘hey let's go skiing, we can put you on a ski’. And I’m like ‘I would break an arm but you guys are afraid of me like doing a little paper cut’.”

Peck’s book documenting his life is set for release Tuesday next week.