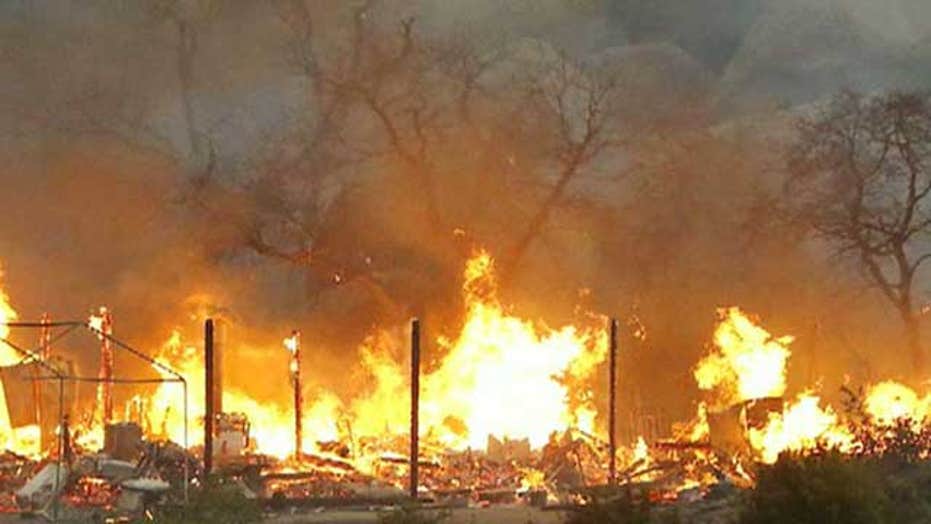 Will Carr reports from Arizona

With no way out, the 19 elite firefighters killed in an Arizona wildfire Sunday night -- 14 of them in their 20s -- unfurled their foil-lined, heat-resistant tarps and rushed to cover themselves.

The tragedy all but wiped out the 20-member Granite Mountain Hotshots, a unit based at Prescott, authorities said Monday as the last of the bodies were retrieved from the mountain in the town of Yarnell. Only one member survived, and that was because he was moving the unit's truck at the time.

The team was known for working on the front lines of region's worst fires, including two this season that came before, MyFoxPhoenix.com reported.

The deaths plunged the two small towns into mourning as the wildfire continued to threaten one of them, Yarnell.

Prescott Fire Chief Dan Fraijo said he feared the worst when he received a call Sunday afternoon from someone assigned to the fire.

"All he said was, 'We might have bad news. The entire Hotshot crew deployed their shelters,'" Fraijo said. "When we talk about deploying the shelters, that's an automatic fear, absolutely. That's a last-ditch effort to save yourself when you deploy your shelter."

Arizona Forestry Division spokesman Mike Reichling said all 19 victims had deployed their emergency shelters as they were trained to do.

As a last resort, firefighters are supposed to step into the shelters, lie face down on the ground and pull the fire-resistant fabric completely over themselves. The shelter is designed to reflect heat and trap cool, breathable air inside for a few minutes while a wildfire burns over a person.

But its success depends on firefighters being in a cleared area away from fuels and not in the direct path of a raging inferno of heat and hot gases.

The glue holding the layers of the shelter together begins to come apart at about 500 degrees, well above the 300 degrees that would almost immediately kill a person.

"It'll protect you, but only for a short amount of time. If the fire quickly burns over you, you'll probably survive that," said Prescott Fire Capt. Jeff Knotek. But "if it burns intensely for any amount of time while you're in that thing, there's nothing that's going to save you from that."

Fire officials gave no further details about the shelters being deployed. The bodies were taken to Phoenix for autopsies to determine exactly how the firefighters died.

More than 1,000 people gathered Monday night in the gymnasium on the campus of Embry-Riddle Aeronautical University in Prescott as others throughout the state and beyond also mourned the firefighter deaths.

Arizona's governor called it "as dark a day as I can remember" and ordered flags flown at half-staff. In a heartbreaking sight, a long line of white vans carried the bodies to Phoenix for autopsies.

"I know that it is unbearable for many of you, but it also is unbearable for me. I know the pain that everyone is trying to overcome and deal with today," said Gov. Jan Brewer, her voice catching several times as she addressed reporters and residents Monday morning at Prescott High School in the town of 40,000.

The lightning-sparked fire -- which spread to 13 square miles by Monday morning -- destroyed about 50 homes and threatened 250 others in and around Yarnell, a town of 700 people in the mountains about 85 miles northwest of Phoenix, the Yavapai County Sheriff's Department said.

About 200 more firefighters joined the battle Monday, bringing the total to 400. Among them were several other Hotshot teams, elite groups of firefighters sent in from around the country to battle the nation's fiercest wildfires.

Residents huddled in shelters and restaurants, watching their homes burn on TV as flames lit up the night sky in the forest above the town.

It was unclear exactly how the firefighters became trapped, and state officials were investigating.

Brewer said the blaze "exploded into a firestorm" that overran the crew.

Prescott City Councilman Len Scamardo said the wind changed directions and brought 40 mph to 50 mph gusts that caused the firefighters to become trapped around 3 p.m. Sunday. The blaze grew from 200 acres to about 2,000 in a matter of hours.

Southwest incident team leader Clay Templin said the crew and its commanders were following safety protocols, and it appears the fire's erratic nature simply overwhelmed them.

The Hotshot team had spent recent weeks fighting fires in New Mexico and Prescott before being called to Yarnell, entering the smoky wilderness over the weekend with backpacks, chainsaws and other heavy gear to remove brush and trees as a heat wave across the Southwest sent temperatures into the triple digits.

President Obama offered his administration's help in investigating the tragedy and predicted it will force government leaders to answer broader questions about how they handle increasingly destructive and deadly wildfires.

"We are heartbroken about what happened," he said while on a visit to Africa.

The U.S. has 110 Hotshot crews, according to the U.S. Forest Service website. They typically have about 20 members each and go through specialized training.

The National Fire Protection Association website lists the last wildfire to kill more firefighters as the 1933 Griffith Park blaze in Los Angeles, which killed 29. The biggest loss of firefighters in U.S. history was 343, killed in the 9/11 attack on New York.

In 1994, the Storm King Fire near Glenwood Springs, Colo., killed 14 firefighters who were overtaken by an explosion of flames.

A makeshift memorial of flower bouquets and American flags formed at the Prescott fire station where the crew was based.

Prescott resident Keith Gustafson showed up and placed 19 water bottles in the shape of a heart.

"When I heard about this, it just hit me hard," he said. "It hit me like a ton of bricks."