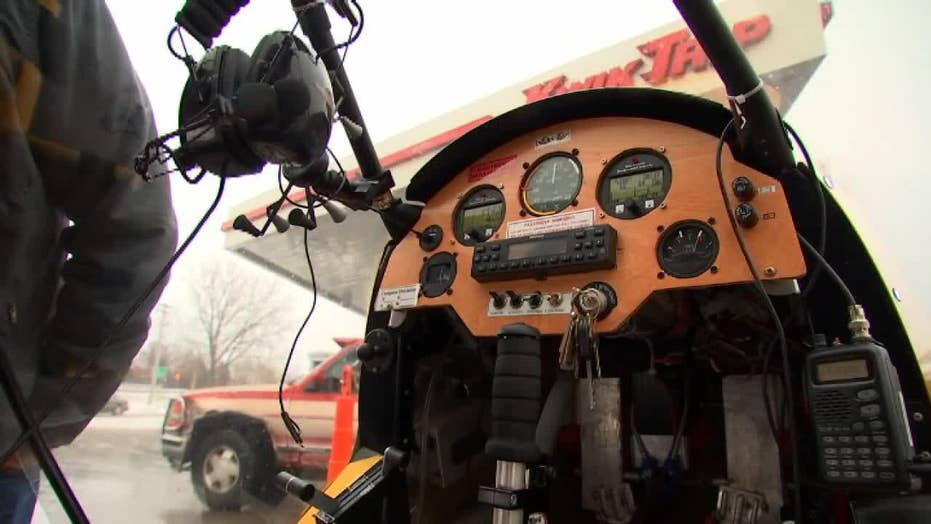 A pilot of a small plane executed the perfect emergency landing on Saturday, even parking at a Minnesota convenience store after the aircraft overheated.

The Chisago County Sheriff's Office said in a Facebook post the incident happened around 11 a.m. in the town of Stacy, located about 35 miles north of Minneapolis.

The yellow aircraft overheated, and the pilot had to land on an exit ramp off Interstate 35 before taxiing to the parking lot of a nearby Kwik Trip convenience store.

"There were no injuries or crashes as a result," the sheriff's office said. "We are deciding whether or not to issue him a citation for being quadruple parked, though," the office quipped.

The pilot, Michael Robbins, 47, of Green Lake, Minn., told FOX9 his temperature gauge showed that his plane was at an unsafe temperature to continue to fly and that he needed to land quickly.

"My alarms started going off in my dash to let me know I have a serious problem and then I started looking for a place to land and that was the best option," he said.

The pilot made an emergency landing on an exit ramp off Interstate 35 in Stacy, Minn. on Saturday. (Chisago County Sheriff's Office)

Robbins said throughout the whole ordeal he stayed calm, and his nerves only hit when the plane was parked.

"Afterward, I got worried and started shaking," he told FOX9.

SMALL PLANE CRASHES AT CALIFORNIA AIRPORT WITH NOBODY INSIDE

Robbins later determined the issue was a coolant leak, which he was able to fix in the parking lot.

"It got cooked onto the muffler, just spraying out there slowly and brought me down," he told FOX9. "That started flashing to let me know I had a serious problem."

Authorities later closed off a nearby roadway so Robbins could take off again and fly the plane to a nearby airport.