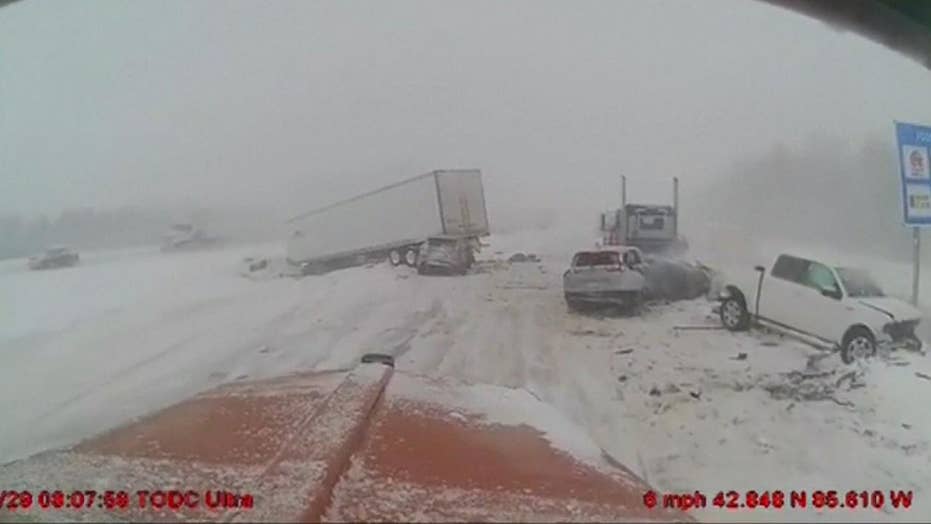 Blinding snow from the polar vortex is being blamed for causing a massive pileup on an interstate in Michigan on Tuesday that was captured on dashcam video.

The pileup of about 30 vehicles happened at about 2 p.m. near Marne, located just outside of Grand Rapids, and involved several semi-trucks and other vehicles.

"The snow was coming down, the visibility was starting to get bad all at one time," Dora Jenkins, who was in the car with her children when the accident happened, told FOX17. "I was just praying at that point because everybody was nervous. I asked God to cover us."

In dashcam video taken by Jason Coffelt and shared with Reuters, heavy snow can be seen even before he approached the accident scene.

A Merl's Towing Service truck pulls a semi-trailer truck out of the snow along M-6 near exit 1 near Grandville on Wednesday, Jan. 30, 2019. Subzero temperatures were recorded across the area. (Neil Blake/The Grand Rapids Press via AP)

Coffelt's truck can be seen driving through traffic before he is forced to swerve to avoid a stationary truck. He then is able to stop just before colliding with other vehicles.

The multi-vehicle crash was one of many throughout the state as road conditions deteriorated, closing hundreds of schools including Eastern Michigan University.

Jake Van Housen, a driver who was also involved in the crash, told FOX17 he had to make a difficult decision fast when he came across the scene.

Wind chill warnings and advisories span the Midwest and Northeast due to the polar vortex. (Fox News)

"I had the choice, I was either going to hit this dude or I'm going to go off to the side into the snow bank," he told the television station.

About a dozen families who were involved in the crash were brought to a nearby church in order to warm up from the cold and arrange alternate transportation. Only a few minor injuries were reported, according to FOX17. The highway had to be closed for several hours while authorities worked to clean up the crash.

Mist from Lake Michigan forms an ice cave in Chicago; Mike Tobin reports from the scene.

A polar vortex — the cold air and low pressure that constantly surrounds both of the Earth’s poles — has allowed bitter cold temperatures to drop much farther south than normal, and has slammed the Midwestern area of the U.S.

Gov. Gretchen Whitmer on Monday declared a state of emergency for Michigan, as authorities warned those in areas experiencing the winter weather should stay inside.

At least 10 people -- including a college student and Indiana police officer -- are dead as a result of the bitter, record-breaking deep freeze.