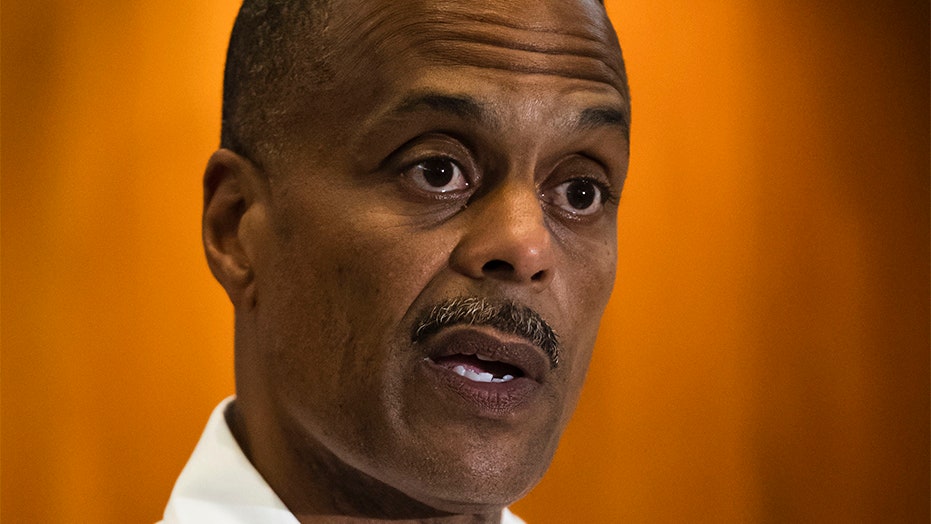 The head of Philadelphia's police union has accused the city’s police commissioner of being “premature and irresponsible” with comments about expecting officers to be fired over alleged racist and anti-Muslim social media posts.

"Our officers are entitled to due process just like any other citizen." Philadelphia Fraternal Order of Police President John McNesby said in a statement calling for "a complete investigation into officer's social media use."

Commissioner Richard Ross' announced Wednesday that 72 officers have been placed on administrative duty as the department conducts an internal investigation on the matter. Ross said he believes “several dozen” of the officers will be disciplined and expects at least some to be fired.

Philadelphia Police Commissioner Richard Ross speaks with members of the media during a news conference in Philadelphia on Wednesday. (AP)

"I am not prepared to tell you at this point who's being disciplined and how many may be terminated, but I can tell you with a degree of certainty there are some people who will meet with that fate," Ross said Wednesday.

The alleged posts were discovered after a team of researchers spent two years looking into the Facebook accounts of police officers across the country. The researchers said they found posts from officers bashing immigrants and Muslims, promoting racist stereotypes, identifying with right-wing militia groups and, especially, glorifying police brutality. All the posts were public.

The union also said its members will be interviewed promptly after being notified that they are being investigated and will return to duty after their interviews.

“It is sad that the investigators with the ‘social justice’ group chose to ignore all the good work done regularly by our officers,” the union said in a statement posted on its website. “During this difficult climate in which police officers are constantly under attack, the FOP will continue to support you.”

Investigators are looking into approximately 3,100 individual posts from the officers, according to Fox 29. The Philadelphia Police Department will hire an independent law firm to determine whether or not each officer’s posts are protected First Amendment speech, it added.

“We’ve talked about, from the outset, how disturbing, how disappointing and upsetting these posts are, and they will undeniably impact police-community relations,” Ross said. The department also announced new racial sensitivity training for officers and is considering revisions to its social media policies.