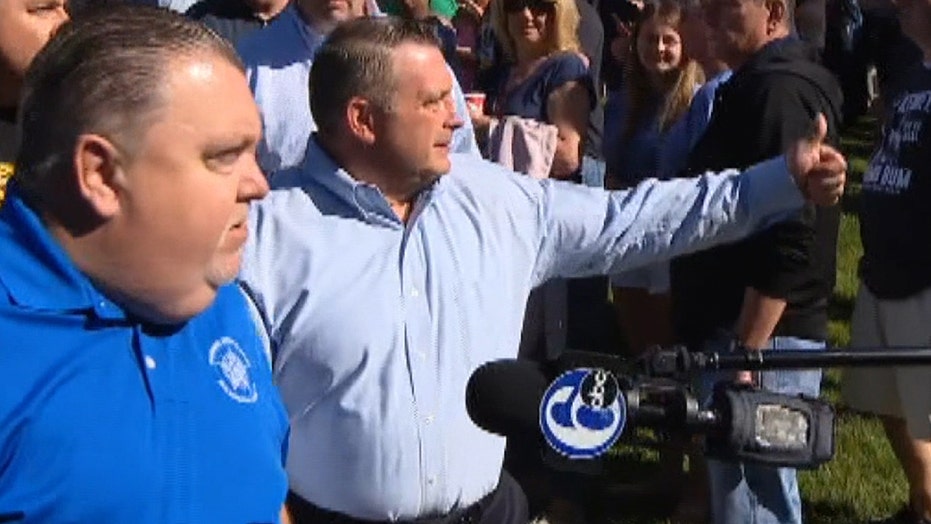 Raw video: Officers applaud Philadelphia Police Staff Inspector Joseph Bologna Jr., who is accused of assaulting a protester, as he leaves Lodge 5 of the Fraternal Order of Police before turning himself in.

A longtime and widely respected Philadelphia Police Department inspector captured on video striking a Temple University student protester with a metal police baton last week turned himself in on aggravated assault and related charges on Monday.

But that wasn’t before hundreds – including many cops in uniform – applauded and saluted the 31 year veteran of the force as he left the police union headquarters to head to the precinct to surrender, Fox 29 Philadelphia reported.

Staff Inspector Joseph Bologna Jr., 54, waved and shouted “Thank you,” as he walked out of Lodge 5 of the Fraternal Order of Police around 8:30 a.m. Monday. Accompanied by his attorney Fortunato Perri Jr., and police union head John McNesby, Bologna got into a black SUV to drive to the 15th Police District.

He was booked, arraigned and released about eight hours later on $10,000 unsecured bail. His preliminary hearing is set for June 25.

A melee broke out between police officers and protesters near the Benjamin Franklin Parkway on June 1. Videos showed Bologna shove one protester back before striking another, later identified as Temple engineering student Evan Gorski, with a metal police baton.

The student’s attorney, Jonathan Feinberg, claimed his client needed 10 staples to the head after the incident. Gorski was held in police custody for more than 40 hours and received medical attention before prosecutors decided to drop the charges against him, the Philadelphia Inquirer reported.

But FOP President McNesby said Bologna followed procedure by striking Gorski in the shoulder – not in the head – as the student interfered with an arrest.

"He never ever even came close to the head, it was shoulder strike, it's what we are trained to do. The proper procedures were followed. Our guidelines were followed," McNesby told WPVI on Monday.

When McNesby was asked about the student's head injury, he said he wasn't sure how it happened.

"That's something you'd have to ask him,” McNesby said, referring to Gorski. “I don't know how he got those staples. He sure as hell didn't get them from Joe Bologna."

In a statement Monday, Bologna's attorney added: “In the midst of this deadly pandemic, Inspector Bologna and his fellow officers were spit on, sprayed with urine and other chemicals, as well as verbally and physically assaulted. His use of force to apprehend an individual who was trying to thwart a lawful arrest during a melee was lawful and justified.”

After a video of the incident went viral, Police Commissioner Danielle Outlaw said Friday that Bologna would be pulled from street duty pending an internal affairs investigation. Hours later, District Attorney Larry Krasner announced the charges against the staff inspector.

“This issue of an arrest warrant for Bologna comes the same day police issued a new catch and release policy for those who assault officers. Why are officers not afforded those same basic rights?” a police union press release said. “Along with arsonists, looters and thieves, Krasner is complicit in the destruction of our great city.”

Several officers attempted to organize a “blue flu,” or when officers call out sick from work in protest, on Saturday, but a police memo warned that the move would only put other law enforcement in danger, as thousands of protesters later gathered in Center City, the Inquirer reported.

Philadelphia Fraternal Order of Police Lodge #5 said Sunday it was selling $20 T-shirts to show support for Bologna. A GoFundMe page set up by a fellow officer raised nearly $22,500 by Monday morning.

Meanwhile, a Change.org petition calling for Bologna’s dismissal had more than 1,700 signatures by Monday afternoon.

In a statement Sunday night, Temple University administrators said they were “extremely disturbed by the violent treatment” of Gorski and would arrange a meeting with city police to discuss the “shared responsibilities and patrols among the Temple Police Department, our Allied Universal security partners, and the Philadelphia Police Department help keep us safe by providing effective layers of service and protection for the Temple community and residents in nearby neighborhoods.”

Both peaceful protests -- and violent riots and looting -- have captivated the nation for two weeks straight following the May 25 death of George Floyd, an unarmed black man who died after a white Minneapolis police officer knelt on his neck for nearly nine minutes.

Police have been accused of using excessive force in quelling crowds, while many officers have also suffered violent attacks. The National Guard was sent into several cities to restore peace and prevent further property damage. Meanwhile, officials in Minneapolis, New York and Los Angeles, as well as congressional Democrats, have pledged to defund police departments and allocate funds into underserved communities – the latest objective advocated by the Black Lives Matter movement.