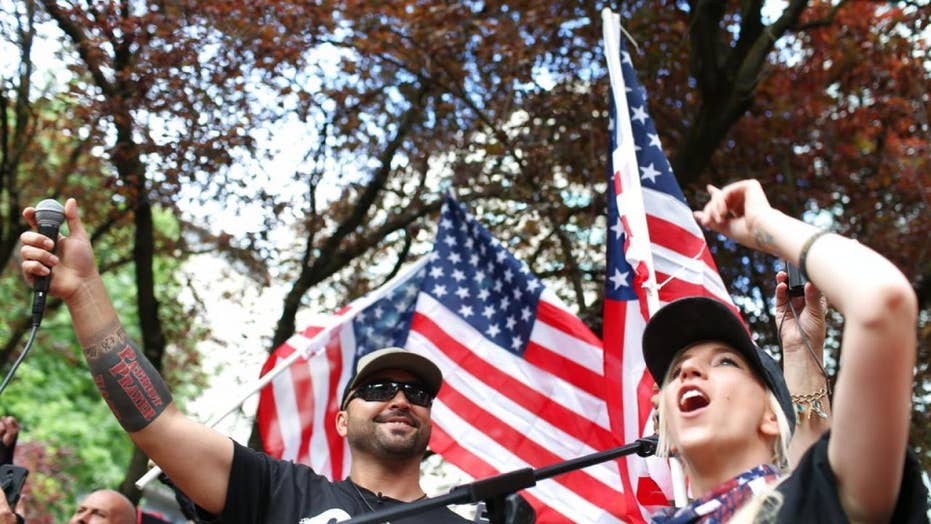 A Patriot Prayer rally in Portland, Oregon turned bloody after groups on both sides clashed.

Members of opposing groups violently clashed in downtown Portland, Ore., on Saturday night during an event that was billed as a march for “law and order.”

Participants with the conservative Patriot Prayer group and counter-demonstrators with Antifa got into a bloody melee outside a popular bar where members on both sides used bear spray, fists and batons to beat each other, the Oregonian reported.

Police fired pepper balls and other non-lethal impact munitions to break up the brawls and there were no immediate reports of arrests. Earlier in the evening, police reported seeing participants from both groups with hard-knuckle gloves, knives and firearms.

No weapons were reported seized. Authorities said four people received medical attention, but it was not known if any were taken to a hospital.

The two groups have clashed in the city before.

The march, dubbed “Flash March for Law and Order in PDX,” was organized by Patriot Prayer leader Joey Gibson in response to Portland Mayor Ted Wheeler’s oversight of the city’s police department. (PDX is the abbreviation for Portland International Airport that is sometimes used as shorthand for the city as well.)

The Patriot Prayer group gathered around 6 p.m. near Pioneer Courthouse Square and marched through downtown holding a sign that read “Replace PDX Mayor!”

The violence erupted after Gibson and about three dozen people waving American flags and reciting patriotic chants walked toward a street memorial for Patrick Kimmons, 27, a black man who was fatally shot by Portland police last month.

At the vigil, they were met by counter-protesters chanting “Black Lives Matter.” The fighting broke out 20 minutes later.

Video posted online shows a protester at one point lighting an American flag on fire. Seconds later someone snatches the flag and puts the flames out.

Saturday’s violence unfolded amid a series of clashes between rival political factions that have gained national attention.

Gibson called for the Saturday march in response to an Oct. 6 incident in which a 74-year-old driver clashed with a group that was protesting police brutality. The police department came under scrutiny for what critics saw as a hands-off approach to the event.

“This isn't political, it's just wrong,” a post on the event’s Facebook page reads. “It's a lack of respect for not only the law but just other humans.”

In a video of the incident that went viral, marchers are seen blocking traffic and directing traffic when the motorist drives through a group of marchers and then speeds off. Some protesters catch up to him and begin pounding on the car before the driver leaves.

The driver later said he meant no harm, he just wanted to get away from the protest, Fox News reported.