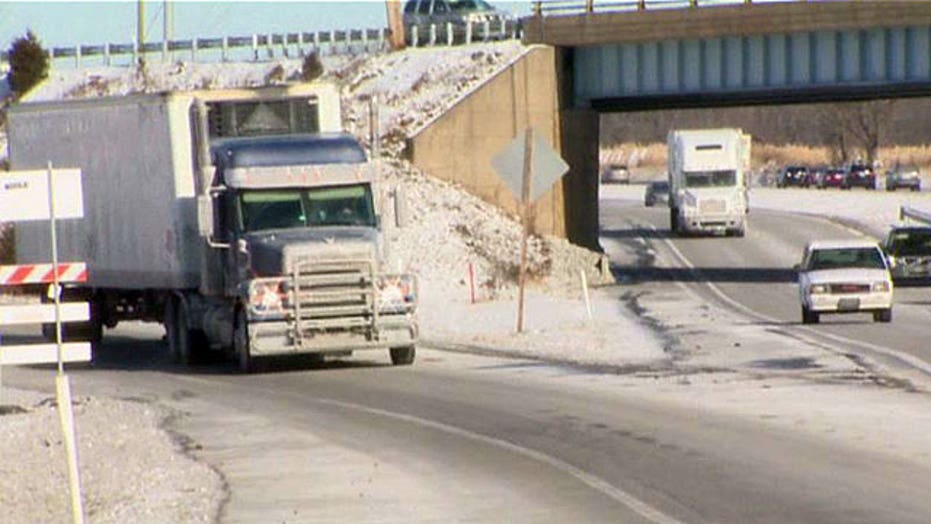 The violent driver suspected of running a Maine man off of a Pennsylvania highway, then shooting him dead in his vehicle, could kill again if authorities don't find him and put him behind bars soon, police warned.

Pennsylvania State Police, who are working with the FBI and police in neighboring states, are pleading with the public for help nabbing the pickup truck driver believed to have gunned down Timothy Davison on the I-81 median near the Maryland border in the wee hours of Saturday morning. The vicious road rage attack, which occurred after Davison called 911 in Maryland to report he was being followed, is the work of an extremely dangerous individual, police said.

"The acts committed against Mr. Davison were random only to the point of his initial encounter with his assailant," the Pennsylvania State Police said in a statement Tuesday. "Beyond that, the acts against him were very deliberate, calculated and violent. With that said, the potential for additional incidents of similar nature is anticipated due to the violent nature of this incident."

Davison, 28, of Poland, Maine, was making the 1,400-mile trip home after spending the holidays with family members in Orlando, Fla., when the other driver began tailgating him, according to police. He lost contact with a Maryland 911 dispatcher as he crossed into Pennsylvania, then called back to say he was being shot at, according to police. He was found dead inside his SUV, which was stuck in a snowbank in the median near Antrim Township in southern Pennsylvania.

Davison's family, meanwhile, is devastated over the young man's death.

"We're all heartbroken," his mother, Theresa, told FoxNews.com Tuesday, as the family prepares for his funeral.

Police are hoping someone saw the incident or knows the killer's identity.

"It is our belief that someone in the tri-state area knows who is or may be responsible for this homicide," the Pennsylvania State Police statement said.

Police are on the lookout for a small, dark-colored pickup truck, possibly a Ford Ranger-style vehicle, with damage to the driver’s side, according to police. Silver paint from Davison’s SUV may be on the truck.

According to police reports, Davison first became engaged with the other driver in Maryland, sometime around 2 a.m. That's when he called 911 to say he was being followed, according to authorities. Police believe the unknown suspect rammed his pickup truck into Davison's SUV, forcing it into a the snow-covered median, where it became stuck. The driver then got out of his vehicle and shot "a couple rounds into the car, striking and killing [Davison]," Pennsylvania State Trooper Robert Hicks told FoxNews.com on Monday.

Hicks would not say what type of gun was used in the shooting or how many times Davison was hit, but an autopsy was planned for Monday.

Police suspect the shooting is connected to another shooting Friday involving a pickup truck in Monaghan Township, Pa., about 30 miles away from the highway shooting, police said Tuesday.

"Both investigations will be treated as being related until conclusive evidence proves otherwise," the statement said.

Davison was about three miles across the state line, in south central Pennsylvania, when he was killed.

It was not known if there were any witnesses or if Davison had been able to provide a license plate number to police when he called 911. Police said the suspect fled south, which would have been back toward Maryland.

Although there is a state Department of Transportation traffic camera mounted along Interstate 81 near where the victim’s vehicle came to rest, the footage was of little use to police, Hicks said.

“You really can’t make out much other than headlights,” he said.

Officials said the cameras are installed to monitor traffic patterns, and not equipped to capture license plates or other details that could prove useful to an investigation.

Davison’s mother, Theresa Allocca, said Sunday that she hopes the killer is brought to justice.

“I just hope this doesn’t happen to anyone else. This wasn’t just road rage. This person is obviously crazy,” Allocca told the Kennebec Journal.

“It’s definitely something that is rare,” he told FoxNews.com. “I can’t say I’ve seen something like this before.”

FoxNews.com's Cristina Corbin and Greg Norman contributed to this report.