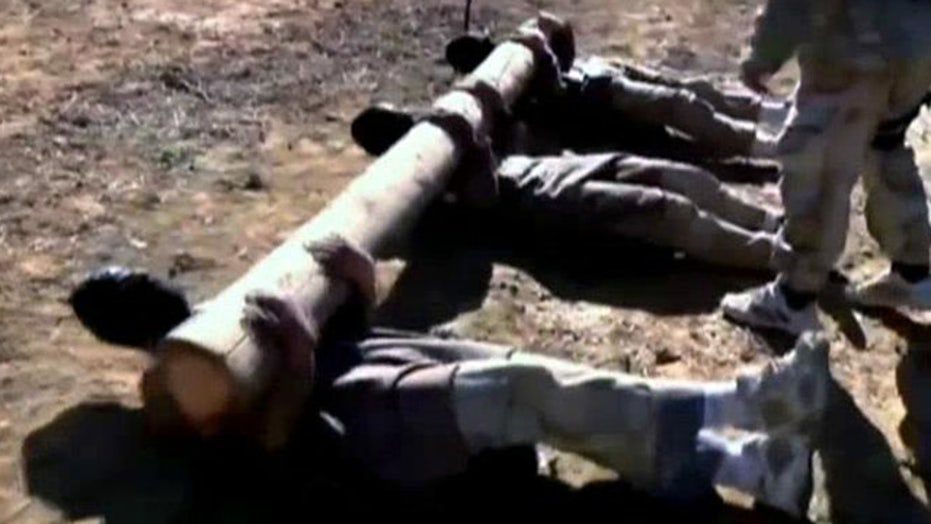 New calls to beef up border security amid threat from ISIS

EXCLUSIVE: Social media chatter shows Islamic State militants are keenly aware of the porous U.S.-Mexico border, and are “expressing an increased interest” in crossing over to carry out a terrorist attack, according to a Texas law enforcement bulletin sent out this week.

“A review of ISIS social media messaging during the week ending August 26 shows that militants are expressing an increased interest in the notion that they could clandestinely infiltrate the southwest border of US, for terror attack,” warns the Texas Department of Public Safety "situational awareness" bulletin, obtained by FoxNews.com.

The three-page bulletin, entitled “ISIS Interest on the US Southwest Border” and dated Aug. 28 was released to law enforcement on Thursday.

“Social media account holders believed to be ISIS militants and propagandists have called for unspecified border operations, or they have sought to raise awareness that illegal entry through Mexico is a viable option,” states the law enforcement bulletin, which is not classified.

It notes no known credible homeland threats or specific homeland attack plot has been identified. That assertion was underscored by Department of Homeland Security Secretary Jeh Johnson, who said Friday that DHS and the FBI are "unaware of any specific, credible threat to the U.S. homeland" from Islamic State.

Despite assurances that no threat to American soil is imminent, the watchdog group Judicial Watch said Friday that Islamic State operatives are in Juarez, just across the border from Texas, and are planning to attack the United States with car bombs.

"Agents across a number of Homeland Security, Justice and Defense agencies have all been placed on alert and instructed to aggressively work all possible leads and sources concerning this imminent terrorist threat," Judicial Watch stated on its website.

The Texas law enforcement bulletin cites suspected fighters from the terrorist group previously known as ISIS and based in Syria and Iraq as eyeing a border crossing.

“The identities of persons operating these accounts cannot be independently verified; however the accounts were selected for monitoring based on several indications that they have been used by actual ISIS militants for propaganda purposes and collectively reach tens of thousands of followers,” states the bulletin. “One account was verified as belonging to an individual located in Mosul, Iraq.”

Some 32 Twitter and Facebook posts monitored by law enforcement over one recent week reflected interest in the southern border, according to the bulletin. The messages, which were forwarded thousands of times, included calls for jihadists to cross over from Mexico to carry out attacks and even alluded to a recent video by U.S. activist James O’Keefe, who was recorded coming across the Rio Grande valley in an Usama bin Laden costume.

The bulletin details numerous “calls for border infiltration” on social media, including one from a militant confirmed to be in Mosul, Iraq who explicitly beckons the “Islamic State to send a special force to America across the border with Mexico.”

“This Twitter account holder, who is the administrator of an ISIS propaganda trading group, stated that the time was right for such an action because ‘the US-Mexican border is now open large numbers of people crossing,’” the bulletin said.

Another message sent out via Twitter suggested that Islamic State fighters have already entered the U.S. via the border, warning that, as a result, “Americans in for ruin (sic).”

The Texas DPS bulletin comes on the heels of a federal Department of Homeland Security and Department of Justice Joint Intelligence bulletin dated August 22, a copy of which was also obtained by FoxNews.com.That bulletin, entitled “Online Reaction but No Known Credible Homeland Threats from ISIL and Its Supporters Following US Air Strikes,”addresses potential threats to the Homeland in response to recent US air strikes on the Islamic State of Iraq and the Levant (ISIL) targets in Iraq and the murder of journalist James Foley.

This bulletin notes that while the FBI and DHS are unaware of specific credible threats against the U.S. from homegrown violent extremists, ISIL or other violent extremist groups overseas “we continue to assess that violent extremists who support ISIL have demonstrated the capability to attempt attacks on US targets overseas with little-to-no warning.”

The report also says that “because of the individualized nature of the radicalization process—it is difficult to predict triggers that will contribute to [homegrown violent extremists] attempting acts of violence…lone offenders present law enforcement with limited opportunities to detect and disrupt plots, which frequently involve simple plotting against targets of opportunity.”

“FBI and DHS assess that civilian deaths reportedly associated with these US military air strikes will almost certainly be used as further examples of a perceived Western war against Islam in English-language violent extremist messaging that could contribute to [homegrown violent extremist] radicalization to violence,” the report notes.

"ISIL and its online supporters have employed—and will almost certainly continue—Twitter “hashtag” campaigns that have gained mainstream media attention and been able to quickly reach a global audience of potential violent extremists, highlighting ISIL’s supporter message and encouraging individuals to commit acts of violence, in Iraq or in the West," the bulletin states.

"Several of the Tweets in response to the air strikes featured original and creative use of graphics—including a photo of the ISIL flag in front of the White House—and graphically rendered images depicting desecration of US monuments and landmarks."