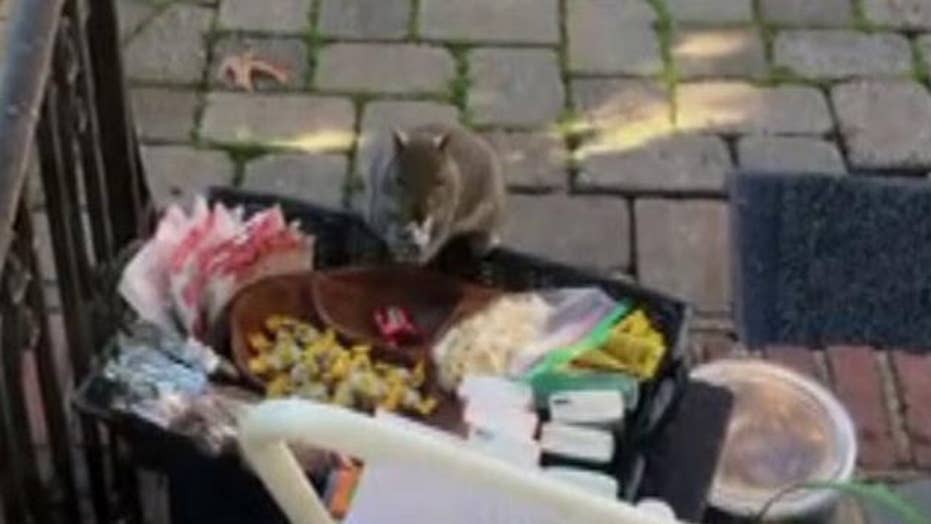 Raw video: A furry thief makes off with gourmet chocolate a family left as a gift for their mail carrier.

A big, fat squirrel in New Jersey clearly has a bit of a sweet tooth because he was caught on video ravaging a holiday treat stand in front of a woman’s home.

Michele Boudreaux, who lives in Maplewood, said on her blog that she typically leaves out snacks and other mini gifts by her door during the holiday season for people making deliveries. But within hours on Monday, all of the chocolates were gone.

And the thief seemed to be targeting the priciest stuff, including about 25 squares of Ghirardelli chocolate, she said.

Never having this happen before, she and her husband decided to put up a surveillance camera to catch the thief.

But upon returning from a walk with their dog on Tuesday, the couple came home to a shock.

“That’s when we spot the FATTEST squirrel," Boudreaux wrote. “I mean, this squirrel is so obese—a jolly ol’ chap—he must be prepping for a decade of winters. Even my rat terrier dog took one look and said, “Nope.””

Still not totally convinced that a squirrel could actually be hoarding that much chocolate, the camera remained up, and eventually caught the furry little thief in the act.

On Wednesday morning, Boudreaux said she found a wrapped chocolate in her driveway – and surely enough, even more scattered around her yard.

“This squirrel went from being the biggest jerk ever to becoming the greatest fuzzy freak I’ve ever not quite met,” she wrote.

She said she decided to move the candy to “a jar that requires opposable thumbs.” And to make peace, she left out a special bowl for her chunky friend full of walnuts, popcorn and pumpkin seeds. But the rotund rodent showed his pickiness yet again.

“He threw all the seeds out on the porch and ate all the other stuff,” she said.

He’s also apparently made off with chap stick, snack bars and cough drops.