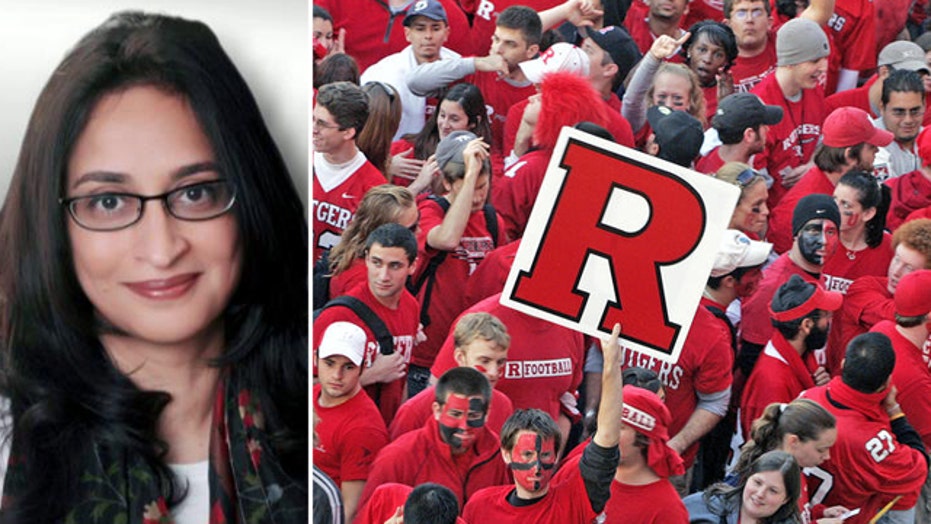 Outrage after professor tweets US more 'brutal' than ISIS

A Rutgers University professor who is under fire for saying that the U.S. is “more brutal” than ISIS has used racial slurs against white men, attacked a leading advocate against female genital mutilation and even led a successful protest last year to stop former Secretary of State Condoleezza Rice from speaking to students.

Deepa Kumar, associate professor of journalism and media studies at New Jersey's main public university, made news recently by tweeting: “Yes ISIS is brutal, but US is more so, 1.3 million killed in Iraq, Afghanistan and Pakistan.” But that tweet, sent in March but only brought to prominent attention after it was noticed by the site SoCawlege.com, is not Kumar's first brush with digital bigotry.

Kumar also attacked Ayaan Hirsi Ali, a former Muslim and activist against the practice of female genital mutilation,as an “islamophobe and native informant” in a public Facebook post, and wrote glowingly of Marxism.

“Here is a great conference on Marxism and why it makes sense!” she wrote in one recent post.

Kumar did not respond to a request for comment on her posts from FoxNews.com, but within hours of the request had deleted or locked her Facebook account. FoxNews.com took screenshots.

Many take issue with support of Marxism – which refers to the philosophy of Karl Marx, the father of communism.

“It is in fact a deadly ideology that has led to the murder of more than 100 million people across the world,” Marion Smith, executive director of the Victims of Communism Memorial Foundation told FoxNews.com.

Regimes operating under the banner of Marxism killed between 85 million and 100 million of their own citizens in the last century according to the Black Book of Communism published by the Harvard University Press, both through mass starvation caused by government takeovers of farms and also mass murders of citizens thought likely to resist communist policies.

“Professor Kumar and other so-called educators like her are doing a disservice to our young people by teaching them a narrow and wrongheaded version of history,” Smith said.

In addition to her attacks on Hirsi Ali, who grew up under Islam in Somalia and was subjected to female genital mutilation and a forced marriage before fleeing to the west, Kumar also condemned former Muslim Wafa Sultan as a “collaborator of U.S. empire” after Sultan criticized Islam. Sultan grew up in Syria and renounced Islam after she witnessed Muslim Brotherhood radicals assassinate one of her college professors with a machine gun while shouting “Allahu akbar!”

Terrorism experts also criticize Kumar’s tweeted claim that the U.S. is more brutal than ISIS because 1.3 million died in U.S. invasions of the middle east – but that number is ultimately based on a survey of 1,499 Iraqis that an independent study found had data that were “not credible.” Actual counts of dead Iraqis find that around 150,000 civilians were killed, many by insurgents.

“I feel bad for Deepa Kumar's students at Rutgers… Only a complete ideologue could claim the United States is more brutal than Islamic State,” Max Abrahms, professor of political science at Northeastern University who specializes in studying terrorism, told FoxNews.com. “Our government isn't in the habit of rounding up thousands of young girls to have them raped dozens of times… or throwing homosexuals off rooftops,” he noted.

Rutgers University did not respond to a request for comment on the posts.

“Unfortunately, it's become commonplace on today's campuses for students or professors to call for the politically motivated silencing or disinvitation of their ideological opponents. Censorship is a double-edged sword, and at Rutgers, we are seeing once again that those who pick up that weapon quickly find themselves on the receiving end of it as well,” Robert Shibley of Foundation for Individual Rights in Education (FIRE) told FoxNews.com.

But he noted that Kumar’s speech at a public university is exactly what the First Amendment is designed to protect.

“The First Amendment is needed precisely to protect speech that is unpopular or that leads to political disagreement,” Shibley said.

Maxim Lott can be reached at www.maximlott.com or at maxim.lott@foxnews.com