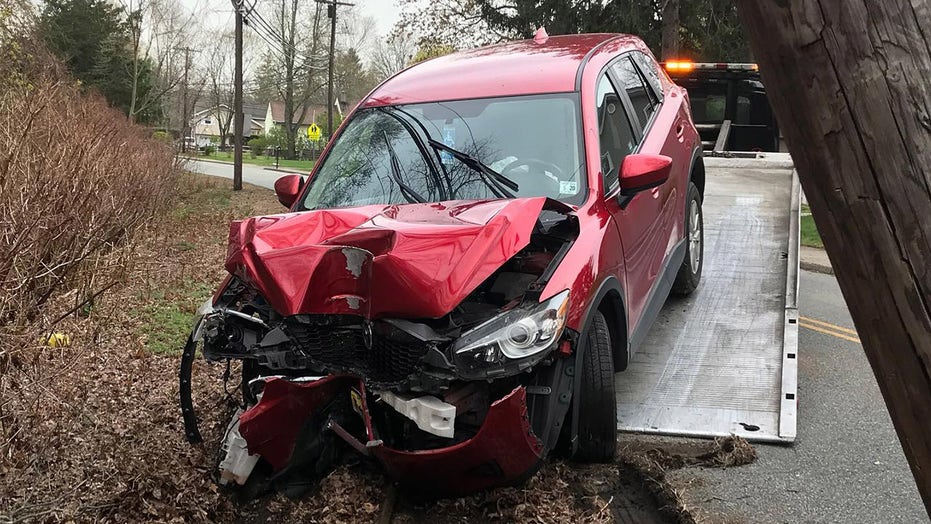 A New Jersey woman who crashed her car into a power pole may have passed out after wearing an N95 coronavirus mask behind the wheel for several hours, police said.

The woman was taken to a local hospital with a complaint of pain after Thursday’s accident on a two-lane road, the Lincoln Park Police Department said.

Police said the owner of this vehicle passed out and crashed after wearing an N95 mask behind the wheel for several hours. (Lincoln Park Police Department)

MUSTANG CRASHES OFF CALIFORNIA CLIFF DURING CORONAVIRUS LOCKDOWN, GETS PULLED OUT BY 'HULK' WRECKER

“The crash is believed to have resulted from the driver wearing an N95 mask for several hours and subsequently passing out behind the wheel due to insufficient oxygen intake/excessive carbon dioxide intake,” the department said on Facebook Friday.

The department offered further explanation in a subsequent post, noting the "overwhelming response" to its original statement.

"It was stated in the original post that we 'believed' the excessive wearing of an N95 mask was a contributing factor to this accident," the department said. “While we don't know this with 100% certainty, we do know that the driver had been wearing an N95 mask inside the vehicle for several hours and ultimately passed out while operating the vehicle.”

Police added, “We also know that nothing was uncovered at the accident scene that would suggest that the driver was under the influence of drugs or alcohol. All this being said, It is certainly possible that some other medical reason could've contributed to the driver passing out.”

The department said that when behind the wheel it is not necessary to wear an N95 mask if there are no other occupants in the vehicle.

The vehicle suffered extensive front end damage. The driver was not identified.