The crew of a tanker, The Silver Muna, spotted and safely rescued Kevin Hyde, 65, and Joe Ditomasso, 76, who were missing for 10 days after their vessel, the Atrevida II, was pushed out to sea by a storm and lost power. Video by crew of Silver Muna.

Two men and a dog who were lost at sea for 10 days after they set sail from New Jersey to Florida, said they relied on prayer and were miraculously saved.

Kevin Hyde, 65, and Joe Ditomasso, 76, were spotted by a tanker in the Atlantic Ocean after they set sail on Hyde's sailboat, named the "Atrevida II," on Dec. 3 and were not heard from again.

The two men said during a press conference Wednesday evening on Staten Island they were swept off course by a storm — but survived with a little faith.

A photo illustration of Kevin Hyde, 65, and Joe Ditomasso, 76, who were rescued by a tanker after they were lost at sea for 10 days.  (U.S. Coast Guard)

"It's just kind of a small miracle that we were found at all," Hyde said, according to FOX 5 New York.

"All I asked the Lord was to see my granddaughter," Ditomasso added during the presser.

The two men and Ditomasso’s 13-year-old Bichon Poodle mix, who was on the sailboat with them, made a stop in Oregon Inlet, North Carolina, and then were not heard from again after a storm with mountain-sized waves pushed them further out to sea, they said.

"A huge storm blew up and blew us off course," Hyde said.

The crew from the Hong Kong-flagged tanker, Silver Muna, recovers two men and their dog that were aboard a sailboat that had been adrift for several days in the Atlantic Ocean, Dec. 13 2022.  (Courtesy video by the crew of the Silver Muna)

The sailboat lost power and ran out of fuel, they said. Its mast was also destroyed.

Ditomasso added: "40-foot seas — there were mountains, I was watching them."

The men never reached their intended destination in Florida and their families reported them missing on Dec. 11.

The U.S. Coast Guard launched a large search-and-rescue effort, involving planes, helicopters, and boats to cover more than 21,000 square miles from Massachusetts to Florida. A U.S. Navy cruiser also assisted in the search, as well as a number of commercial and recreational vessels, FOX 5 New York reported.

FAMILY OF MISSING NC BOATER, A SPECIAL FORCES VET, BELIEVES HE IS ALIVE: 'HE IS OUT THERE'

After they were missing for 10 days, the two men were found by a tanker, The Silver Muna.

"The #USCG, with assistance from the tanker vessel Silver Muna, located the #boat 214 miles east of Delaware," the Coast Guard said. "The Atrevida II was found to be without fuel and power, rendering their radios and navigation equipment inoperable." 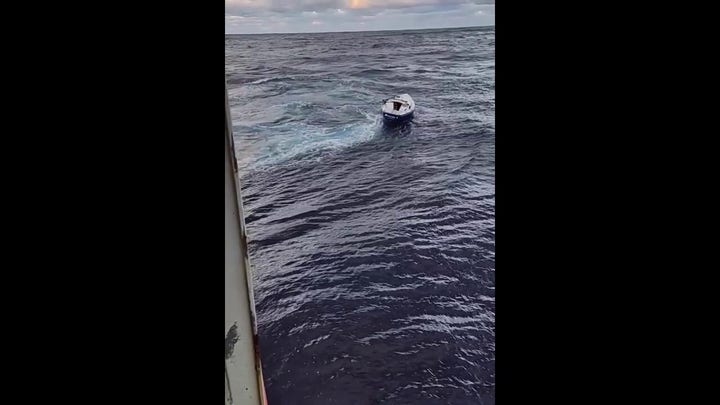 "We were waving and stuff like that because by that time, my mast was down, all systems were mute, we were just kind of hanging on to the boat," Hyde recalled. "It's like finding a needle in a haystack in this situation."

Captain Neerah Chaudhary said he too was praying for the men, who he safely rescued.

"We rescued them with our crane, cargo net," Chaudhary said, according to the report. "I was praying, 'God save them, our rescue should be successful.'"

Chaudhary brought the men and the dog into New York Harbor, where the Coast Guard reunited with their families.

"This is an excellent example of the maritime community’s combined efforts to ensure safety of life at sea," said Cmdr. Daniel Schrader, the spokesperson for Coast Guard Atlantic Area. "We are overjoyed with the outcome of the case and look forward to reuniting Mr. Hyde and Mr. Ditomasso with their family and friends. "

He added: "We also want to highlight the importance of proper safety equipment and preparedness when going to sea. Having an emergency position indicating radio beacon, or ‘EPIRB’, allows mariners to immediately make contact with first responders in an emergency."

As for the men, they said they are happy to be home and are looking forward to celebrating Christmas.