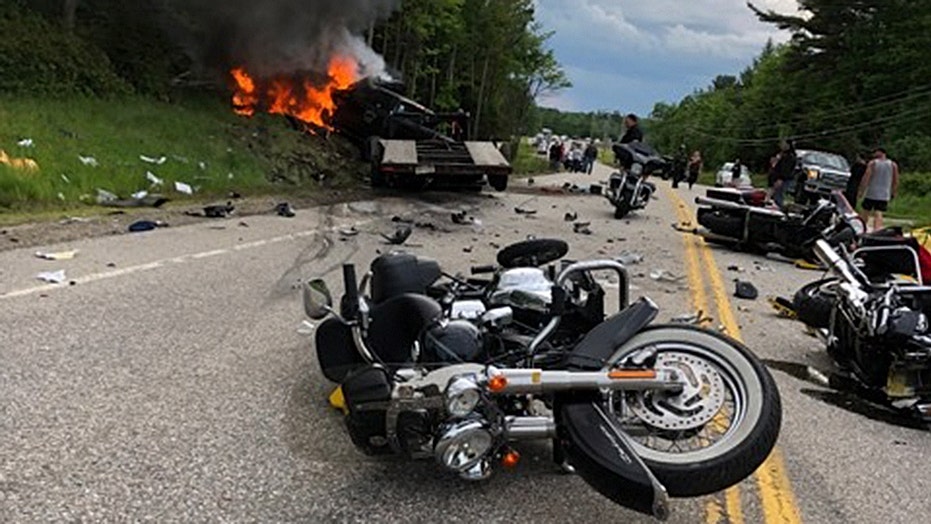 A tragic crash on a rural, two-lane highway in New Hampshire took the lives of at least seven motorcyclists and left three others injured Friday.

State police said a 2016 Dodge 2500 pickup truck collided with the motorcyclists on U.S. 2 in Randolph. Additional details will be released as authorities investigate the tragedy.

Bystanders who witnessed the crash began scrambling for first aid kits and blankets to treat injured people scattered along the road, but at least for seven of them it was too late – they died on the scene.

Gov. Chris Sununu tweeted his condolences, saying "our thoughts and prayers are with the victims, their families, &amp; first responders who answered the call." ((Miranda Thompson via AP))

Two other people were transported to the Androscoggin Valley Hospital and one was airlifted to Maine Medical. It remained unclear what was their condition.

Parts of the rural two-lane highway were closed Friday evening, state police said, and would be closed for several more hours as investigators look for clues about what caused the crash.

“There was debris everywhere,” Miranda Thompson, 21, of Manchester, told the Associated Press. She was several cars back and said she saw a truck in flames on the side of the highway and six motorcycles.

“People were in the grass. There were people putting tourniquets on people, trying to make sure they didn’t move,” she said. “You could tell people were lost who it happened too ... It was a sad day for all of them.”

Gov. Chris Sununu tweeted his condolences, saying "our thoughts and prayers are with the victims, their families, & first responders who answered the call."

Jerry Hamanne, co-owner of a nearby bed-and-breakfast that was hosting one of the motorcyclists in the group, said he and a doctor also staying at his place rushed to the scene to help.

“It was so devastating to see the bodies on the road,” Hamanne said. “My God, I don’t want to see something like this again.”

Charlie St. Clair, executive director of Laconia Motorcycle Week Association, which hosts one of the state’s biggest rallies in June, said this is the worst accident of this magnitude involving bikers in a long time in New Hampshire.

The cause of the deadly collision is not yet known. The pickup truck was on fire when emergency crews arrived. ((Miranda Thompson via AP))

He said that he heard the bikers were Marine veterans who belonged to the same motorcycle club.

“This is staggering and it’s tragic beyond description,” St. Clair added. “You have a bunch of people out for a ride enjoying one of the first nice days we had. To have this happen, it defies logic quite frankly.”