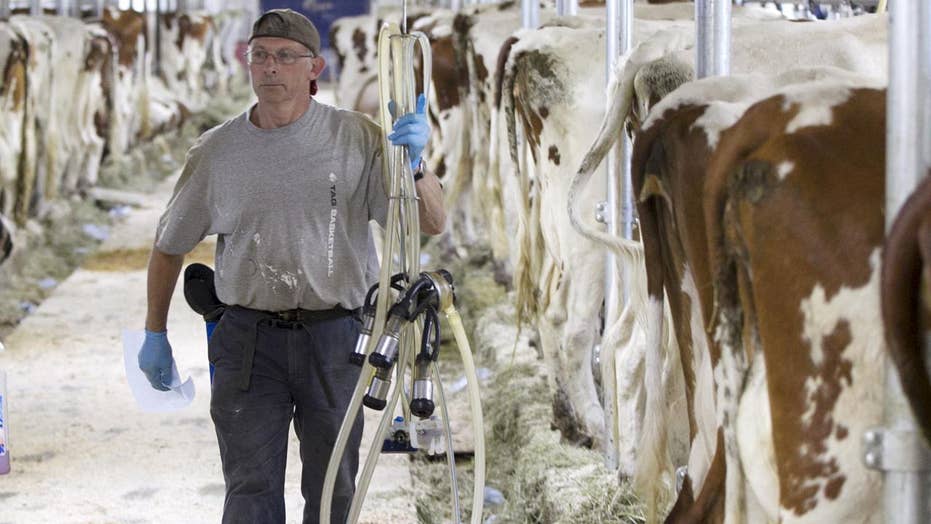 US dairy farmers caught in middle of trade fight with Canada

SHEBOYGAN, WISCONSIN – Farms like the Phil-Mar-Ru in Wisconsin depend on what is called ultra-filtered milk that for decades was sold to Canada.

But a Canada trade dispute meant Wisconsin farmers were suddenly cut off from their biggest buyers – and now many of them risk closure. As of May 1, when their contract expires, dozens of dairy farms in the U.S. will no longer have anyone to purchase their milk.

Experts say lost revenue to U.S. farms is estimated at $150 million. And next Monday, when the contracts run out, at least 75 farmers will be faced with too much milk and not enough buyers.

“We would have to have an auction,” said Matt Gartman of the Phil-Mar-Ru dairy farm, which has been in business for seven generations. “We would have to sell the cows. That would be our only option.”

Canada blamed the U.S. over production on the pricing dispute. But Canada’s decision to change its milk pricing policy has sparked a bitter war of words between U.S. and Canada and has escalated trade tensions between the two countries.

On Tuesday, the Trump administration slapped Canada with a 20 percent tax on lumber imports – and there were reports that President Donald Trump was considering withdrawing from the North American Free Trade Agreement, or NAFTA, in the next few days.

Trump has made it no secret that he was displeased by Canada’s decision to alter dairy pricing. He called the move “a disgrace" that hurts U.S. producers in dairy states like Wisconsin.

He tweeted Tuesday that Canada is making life "very difficult" for American dairy farmers and that the government "will not stand" for it.

"This has been going on for a while. And we're not going to put up with it," Trump said during a roundtable Tuesday with farmers. "People don't realize Canada's been very rough on the United States. Everyone thinks of Canada as being wonderful, and so do I. I love Canada. But they've outsmarted our politicians for many years."

For its part, Canada issued a sharp rebuke on the U.S.’s tariffs on wood, calling them unfair and punitive. Canadian leaders suggested the U.S. was retaliating because of an issue that was not even their fault.

“The challenges that the dairy industry faces in the United States and in Canada are part of a global market issue,” said David MacNaughton, Canadian Ambassador to the U.S., “not one that is caused by Canada.”

Canada heavily depends on the U.S. for exports – about 75 percent of its exports are bought by the U.S. It is only 18 percent from U.S. to Canada.

“If NAFTA were functioning properly you wouldn’t be having these sorts of very prickly, very unfortunate developments back to back,” Ross said. “In that sense, it shows that NAFTA has not worked as well as it should.”