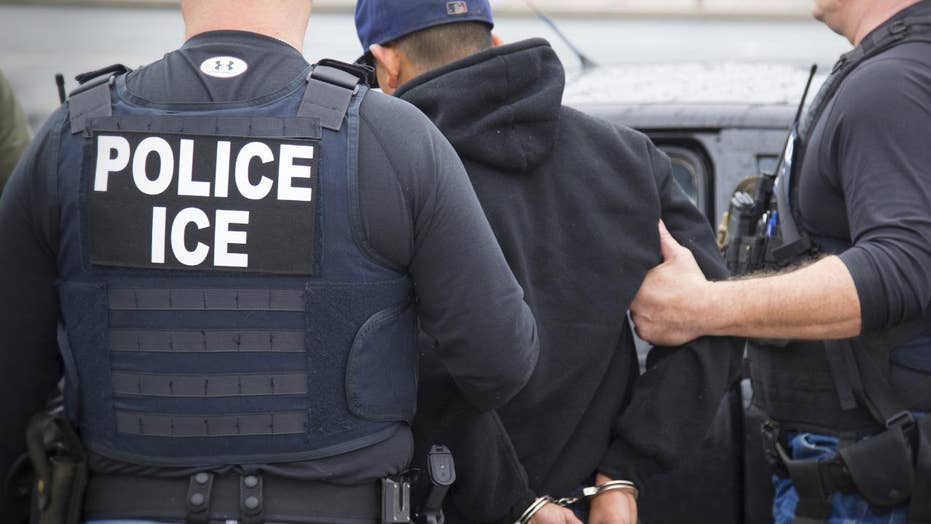 A MS-13 gang member with a warrant by Interpol was among 91 people, including some with violent criminal records, arrested over a five-day period in New Jersey by U.S. Immigration and Customs Enforcement, the agency announced Monday.

"The remarkable results of our officers and law enforcement partners highlight ICE's ongoing commitment to public safety," John Tsoukaris, Field Office Director of ICE's Enforcement and Removal Operations in Newark, said in a statement. "This operation focuses on the arrest of individuals convicted of serious crimes and are a threat to public safety. Because of the targeted efforts of these professional officers, there are 91 fewer criminals in our communities."

Of those arrested during the operation, 77 percent were convicted criminals, and 70 percent had prior felony convictions, according to ICE.

The 91 arrests were made over five days in New Jersey, officials said. (ICE)

Arrests were made in the New Jersey counties of Atlantic, Bergen, Burlington, Camden, Cumberland, Essex, Hudson, Mercer, Middlesex, Monmouth, Passaic, Union, and Warren, in addition to in New Castle County in Delaware and New York City.

Among those arrested include a Salvadoran national in the country illegally, who has an Interpol warrant for being a member of MS-13 and trafficking in firearms and narcotics.

Several other MS-13 gang members were arrested in the towns of Plainfield, Lindenwold, and South Brunswick, according to ICE.

The agency said that those arrested in the sweep will go through removal proceedings before an immigration judge, while those already under a final order of removal will be deported from the U.S.