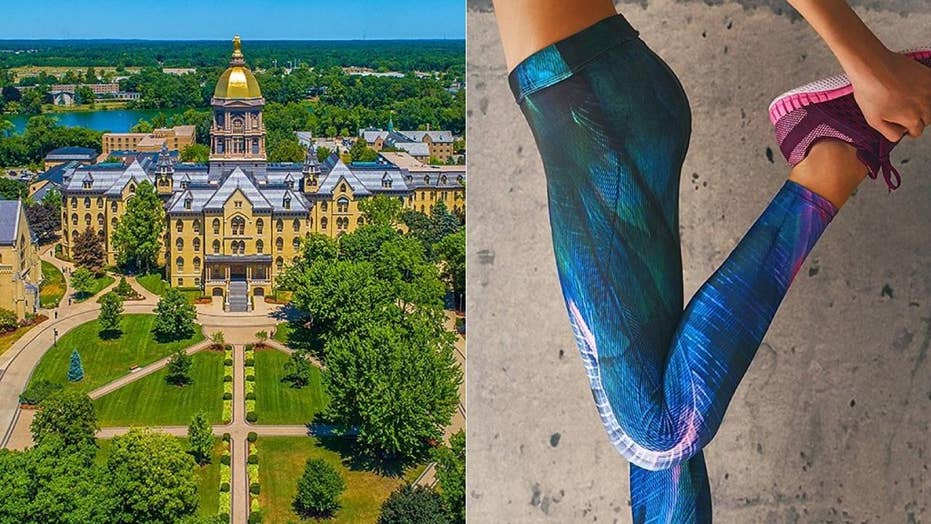 A mother-of-four is facing backlash after penning a letter pleading with female students at the University of Notre Dame to opt out of wearing leggings.

A mother-of-four is facing backlash after penning a letter pleading with female students at the University of Notre Dame to opt out of wearing leggings “and consider choosing jeans instead.”

The mother, who was identified as Maryann White, penned the letter titled, “The legging problem,” which was published in The Observer, Notre Dame’s student newspaper. She started her letter by saying she had been considering writing it for some time after she attended Mass last autumn and saw four young women in front of her “all wearing very snug-fitting leggings and all wearing short-waisted tops.”

“Some of them truly looked as though the leggings had been painted on them,” White wrote.

The mother said her sons “know better than to ogle a woman’s body – certainly when I’m around (and hopefully, also when I’m not).”

“But you couldn’t help but see those blackly naked rear ends,” White said of the women wearing leggings during Mass. “I didn’t want to see them — but they were unavoidable. How much more difficult for young guys to ignore them.”

“For the Catholic mothers who want to find a blanket to lovingly cover your nakedness and protect you — and to find scarves to tie over the eyes of their sons to protect them from you!” she wrote.

White concluded her letter saying leggings are “so naked, so form fitting, so exposing.”

“Could you think of the mothers of sons the next time you go shopping and consider choosing jeans instead?” she asked. “Let Notre Dame girls be the first to turn their backs(ides) on leggings.”

The letter appeared to have the opposite effect on students at the Indiana campus.

“We wanted … to remind people that leggings are absolutely OK and you’re allowed to dress your body in whatever way you see fit,” Anne Jarrett, 21, a student at Notre Dame, who helped organize the demonstration, told Today Style.

Conrad Palor, a sophomore at the university, penned a response to White’s letter that was published in The Observer.

“While White’s comments were likely intended to be innocuous, they contribute to and further the narrative that women need to dress in order to not distract their male peers, which only furthers the sexualization and subsequent subjugation of women’s bodies,” he wrote.

A fellow Notre Dame mother, Heather Piccone, penned a letter to The Observer pointing out that “if nakedness is wrong, then this woman’s sons better have been fully clothed at the beach at all times.”

“They better never have played a game of “shirts versus skins” pick-up basketball or football in the park,” she wrote.

Leggings as pants have sparked debates since coming into popularity. Some schools banned students from wearing the clothing item altogether.