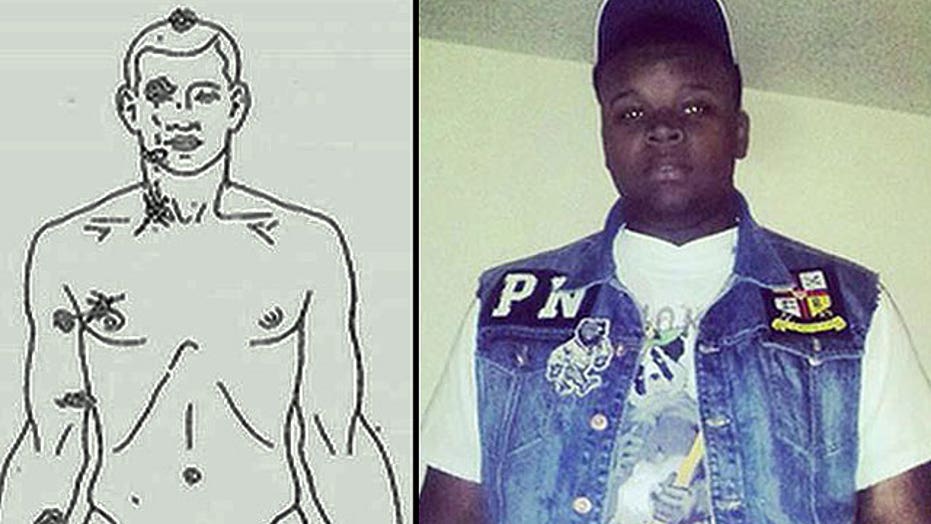 Missouri Gov. Jay Nixon ordered National Guard troops to the St. Louis suburb of Ferguson early Monday after authorities used tear gas to clear the streets of protesters hours before a midnight curfew took effect for a second consecutive day, while a private autopsy on the unarmed black teen who was fatally shot by a white police officer reportedly showed six gunshot wounds, including two in the head.

"Tonight, a day of hope, prayers, and peaceful protests was marred by the violent criminal acts of an organized and growing number of individuals, many from outside the community and state, whose actions are putting the residents and businesses of Ferguson at risk," Nixon said in a statement released by his office. "I am directing the highly capable men and women of the Missouri National Guard to assist ... in restoring peace and order to this community."

As night fell in Ferguson, another peaceful protest quickly deteriorated after marchers pushed toward one end of a street and authorities — who said they were responding to reports of gunfire, looting, vandalism and protesters who hurled Molotov cocktails — pushed them back by repeatedly firing tear gas. The streets were empty well before a state-imposed curfew took effect at midnight.

"Based on the conditions, I had no alternative but to elevate the level of response," said Capt. Ron Johnson of the Missouri Highway Patrol, who is command in Ferguson.

At least two people were wounded in shootings by civilians, he said. A Missouri Highway Patrol spokesman said that at least seven people were arrested on charges of failing to disperse.

The New York Times reported late Sunday that an autopsy on Michael Brown's body was carried out at the request of Michael Brown's family by Dr. Michael Baden, the former chief medical examiner for New York City.

Baden told the Times that one of the bullets struck the top of Brown's skull, suggesting that the 18-year-old's head was bent forward when he was shot. The doctor added that four of the six shots struck Brown in the right arm, and all the bullets entered from the teen's front. Only three of the bullets were recovered from Brown's body.

Brown was fatally shot by Ferguson Police Officer Darren Wilson on the afternoon of August 9 after a confrontation near Brown's grandmother's apartment. The shooting has prompted nationwide protests and the controversy has been augmented by the response from  local authorities, who have used tear gas and smoke canisters against protesters and have been slow to release information about the deadly encounter.

Baden told The Times that his findings were not meant to resolve the controversy over the confrontation between Brown and Wilson.

"We need more information; for example, the police should be examining the automobile to see if there is gunshot residue in the police car," he told the paper.

Baden's autopsy was the first of three planned in the case. Attorney General Eric Holder on Sunday ordered a federal medical examiner to perform an autopsy in addition to the one planned by state authorities. Justice Department spokesman Brian Fallon said that the order was prompted by the "extraordinary circumstances" surrounding the case and the wishes of Brown's family.

"This independent examination will take place as soon as possible," Fallon said. "Even after it is complete, Justice Department officials still plan to take the state-performed autopsy into account in the course of their investigation."

Back in Ferguson, Sunday's clashes erupted three hours before the curfew imposed by Gov. Jay Nixon.

Officers in riot gear ordered all the protesters to disperse. Many of the marchers retreated, but a group of about 100 stood defiantly about two blocks away until getting hit by another volley of tear gas.

Protesters laid a line of cinder blocks across the street near the QuikTrip convenience store that was burned down last week. It was an apparent attempt to block police vehicles, but the vehicles easily plowed through. Someone set a nearby trash bin on fire, and the crackle of gunfire could be heard from several blocks away.

Within two hours, most people had been cleared off West Florissant Avenue, one of the community's main thoroughfares. The streets remained quiet as the curfew began. It was to remain in effect until 5 a.m.

Earlier in the day, Johnson said he had met members of Brown's family and the experience "brought tears to my eyes and shame to my heart."

"When this is over," he told the crowd, "I'm going to go in my son's room. My black son, who wears his pants sagging, who wears his hat cocked to the side, got tattoos on his arms, but that's my baby."

Johnson added: "We all need to thank the Browns for Michael. Because Michael's going to make it better for our sons to be better black men."

The Rev. Al Sharpton told the rally Brown's death was a "defining moment for this country."

Sharpton said he wants Congress to stop programs that provide military-style weaponry to police departments. He said he expects police to "smear" the slain teenager, his family and his attorneys. He also condemned the recent violence and looting in Ferguson.

Wilson, a six-year police veteran with no recorded complaints against him, has been on paid administrative leave since the shooting, and the department has refused to say anything about his whereabouts.