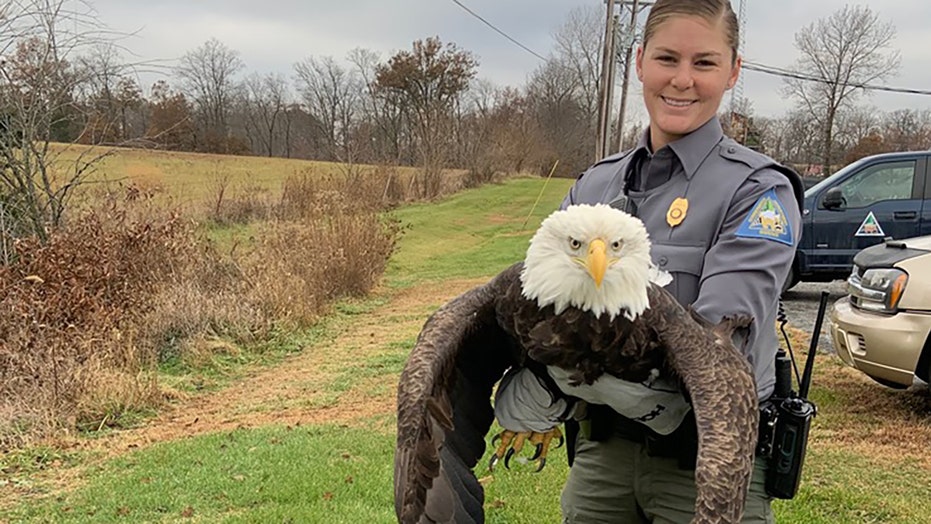 A bald eagle in Missouri was recovering this week after wildlife officials found the bird suffering a shotgun wound to its wing, officials said.

Missouri Department of Conservation Agents Haeley Eichler and Sean Ernst responded Friday to a call about an injured bird near Paris, about 48 miles outside Columbia, the department said.

TRUMP TO PARDON TURKEYS BREAD AND BUTTER AHEAD OF THANKSGIVING

The agents discovered an adult female bald eagle in a cornfield with an injured wing, the Missourian reported. The bird, unable to fly, unsuccessfully tried to hop away from the agents.

Conservation Agents Haeley Eichler and Sean Ernst found and captured the injured bird before sending it for treatment. (Missouri Department of Conservation)

Eichler and Ernst captured the bird, now named Dorothy Parker, and sent it to the University of Missouri's Raptor Rehabilitation Project in Columbia for treatment, FOX4 Kansas City reported.

The bird was hit in the ulna — a bone in its wing — but the bullet fragments weren’t immediately removed over fears her wing could be further damaged, communications director Tracey Berry told the station Sunday.

She said that vets wrapped the ulna so the bone wouldn't become displaced, adding that it was too early to tell if the bird would make a full recovery and fly again.

While bald eagles are no longer listed as an endangered species, the birds are still protected under federal law.

Those who violate the Bald Eagle Protection Act could face a maximum penalty of one year in prison and a $100,000 fine, according to the U.S. Fish and Wildlife Service. A second offense becomes a felony, with 2 years in prison and a $250,000 fine. The fines are doubled for organizations.

The conservation agents are investigating in the hopes of finding those responsible.

“It’s very gratifying knowing that we’re able to rescue such a regal animal,” Ernst told the Missourian. “We hope that we can apprehend the suspects and bring this case to a close.”