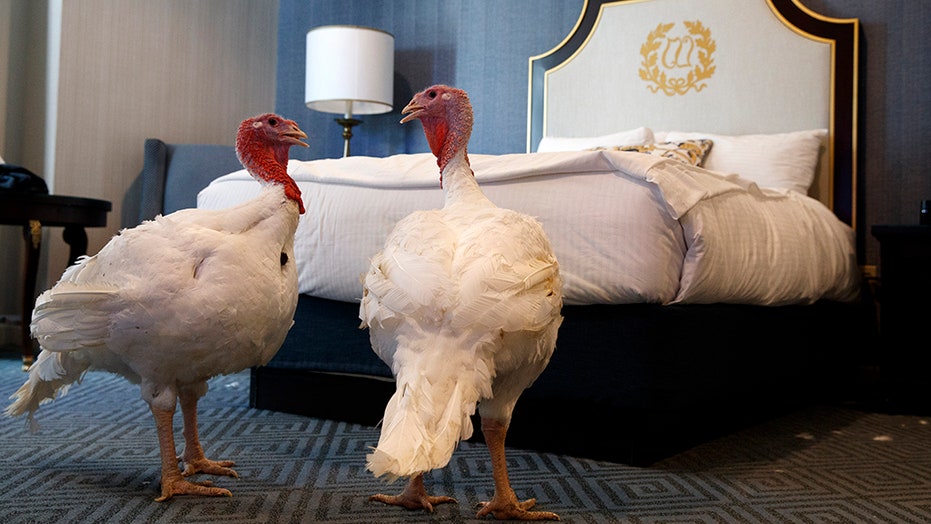 President Trump on Tuesday will pardon two turkeys at the White House ahead of Thanksgiving — a decades-long tradition in which the president uses the power of the office to keep a pair of the meaty birds off holiday tables.

Bread and Butter, two male turkeys from North Carolina, are set to be pardoned during a ceremony in Washington, D.C. as the two vie for the title of "National Thanksgiving Turkey."

A LOOK AT THE WHITE HOUSE'S THANKSGIVING TRADITION OF PARDONING TURKEYS

"The Presidential Turkeys have arrived in DC! The two birds are settled in at The Willard Hotel after their trek from North Carolina and are resting up for the big ceremony on Tuesday," the White House wrote in a Facebook post Sunday.

Bread and Butter, pictured here in their hotel room at the Willard InterContinental Hotel in Washington, D.C., will be pardoned by President Trump on Tuesday. (AP Photo/Jacquelyn Martin)

Americans can cast their votes for which turkey – Bread or Butter – they want to name the official "National Thanksgiving Turkey."

Last year, Trump pardoned two birds named Peas (who won the coveted title) and Carrots during the traditional event. The two were raised on a farm in South Dakota, and after they were pardoned, they were sent to spend the rest of their days at Virginia Tech’s “Gobbler’s Rest,” where they are cared for by students and veterinarians.

"Even though Peas and Carrots have received a presidential pardon, I have warned them that House Democrats are likely to issue them both subpoenas," Trump joked at the Rose Garden ceremony last year.

TRUMP PARDONS THANKSGIVING TURKEYS IN 2017: 'DRUMSTICK HAS A BRIGHT FUTURE'

The tradition was established in 1989 by President George H.W. Bush, who spared a 50-pound bird, according to experts.

The custom of sending turkeys to the White House is an old one – dating back to the 1870s when “poultry king” Horace Vose would send his birds – but many former leaders of the free world actually ate the turkeys instead of setting them free.

However, some presidents, including Abraham Lincoln and John F. Kennedy, spared a few fowls in their day. Harry S. Truman was rumored to have saved a few Thanksgiving turkeys, although his presidential library dispelled those claims.

Previous reporting by Fox News was used in this report.