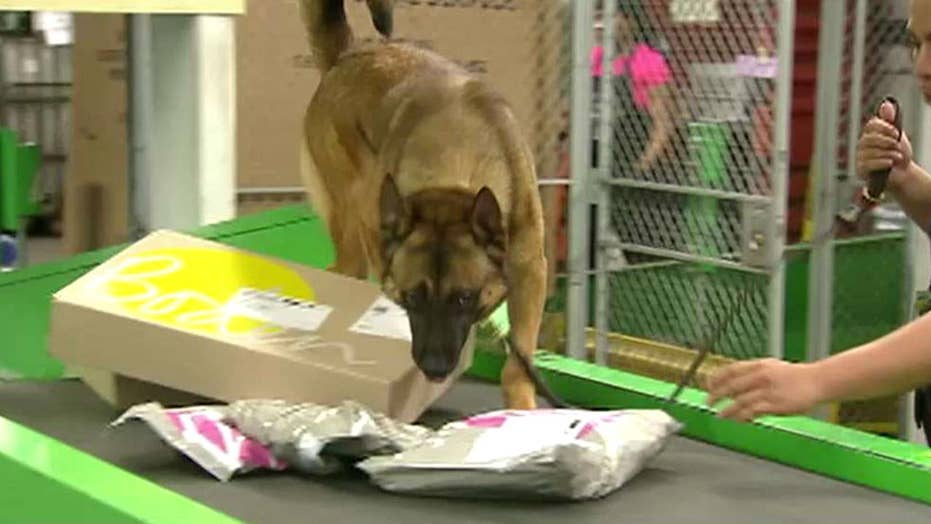 Feds use dogs to sniff out drugs in mail packages

CHICAGO – Some of the frontlines in preventing lethal opioids and fentanyl from getting into American communities happens to be at the United States Postal Service. The amount of packages that are stuffed with lethal drugs and intercepted by federal agents is something that has to be seen to be believed.

All international packages arriving to the United States are screened by U.S. Customs and Border Protection agents. Roughly 1.7 million packages a day are X-rayed, scanned and sniffed by dog teams.

FoxNews.com got an inside look at the process at the mammoth USPS international shipping facility at Chicago’s O’Hare International Airport. A well-trained K9 runs up and down conveyor belts rapidly sniffing packages of all shapes and sizes as the items first make their way into the facility. The dog’s handler keeps the pup on a tight leash, and also keeps his eye on the packages. Within just a few minutes, the K9 detected three packages with drugs.

Every ounce or milligram of these dangerous drugs intercepted could be a life saved.

The U.S. Customs and Border Protection agents are also making use of a mind-boggling new piece of equipment called the Gemini. It’s able to identify 22,000 substances within seconds.

“I’m going to activate the laser and within a few seconds, it’s going to take its reading,” said Customs and Border Protection Officer Francis Byrne, as he placed the laser pen onto an unknown bag of powder. “In this case, it’s fentanyl hydrochloride, so that would be a schedule-one narcotic we would seize.”

U.S. Customs and Border Protection says that fentanyl is the most frequently seized synthetic opioid. The synthetic painkiller is so lethal that a few milligrams can kill a person.

The Centers for Disease Control and Prevention estimates that fentanyl killed 20,000 people in 2016.

And the amount being seized is growing astronomically.

“We’ve certainly been focused on interdicting opioids,” said U.S. Customs Port Director Matthew Davies. “It’s been something we’ve been working on for years, but we’ve ramped up our efforts in the last year. We’ve increased staffing, we have new technology in place, we’ve trained our K9s to detect fentanyl, so we’re certainly on the frontlines of it here.”

Agents turn over many of the packages to police, but it can be nearly impossible to track down a criminal sender in a remote location in a country such as China — which is where the majority of illicit packages are shipped from that arrive to the Chicago facility.

Last week, the U.S. House passed an ambitious package to combat the drug epidemic plaguing America, blamed for 42,000 deaths in 2016.

It also gives border patrol and the postal service a greater ability to crack down on the people sending the drug-stuffed packages to America.

The bill comes after President Trump last year launched a campaign against opioids and drugs, even floating the idea of capital punishment for some drug dealers.

“Nobody is safe from this epidemic that threatens all — young and old, rich and poor. Urban and rural communities,” the president said.