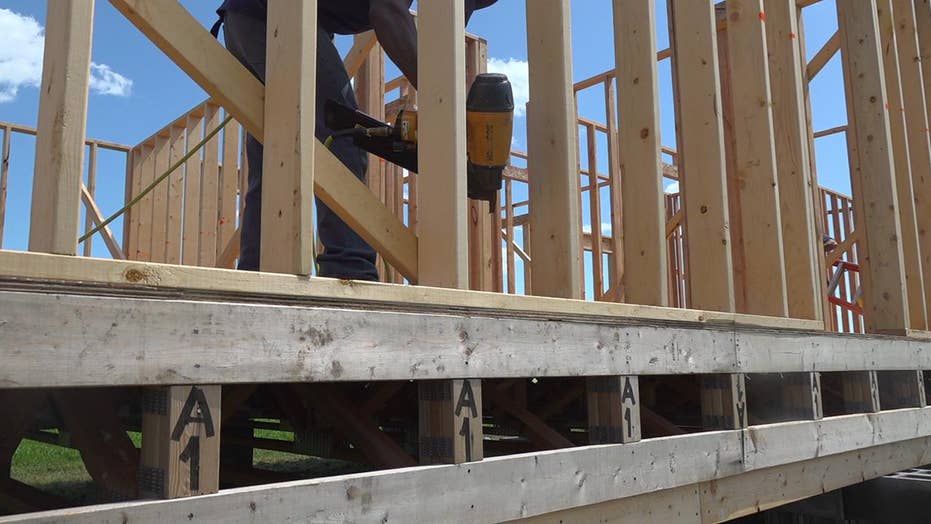 Inmates in the Midwest are helping to combat the lack of affordable housing.

NEWTON, Iowa -- Joshua Goemaat, an inmate at Newton Correctional Facility in Iowa, is literally laying down the foundation for his new life once he completes his four-year sentence for charges related to burglary.

While in prison, he's been building homes to learn a new skill -- and address the area's housing needs.

“This gives me something to do out of the norm, I should say, for prison work,” he said.

Goematt is one of six paid inmates working on a new project under Iowa’s Prison Industries Program called Homes for Iowa. It's part of a growing trend to get inmates to help ease the affordable housing crunch in some areas of the state.

Inmates serving time at low and medium-security prisons are eligible for the program, according to the Des Moines Register.

Inmates at Newton Correctional Facility in Iowa are taking part in a new apprenticeship program that allows them to learn the skills to construct a new home while addressing the housing shortage. FOX NEWS/MITTI HICKS

Organizers of these programs say they serve a dual need -- helping inmates while addressing local needs. But critics say it exploits inmates.

Inmates in Iowa are paid about $1 an hour to construct a home, which is far less than minimum wage.

The program in South Dakota is meant to address a problem that state leaders have called a crisis: the lack of affordable housing.

“We build about 100 two-and-three bedroom homes and the demand for affordable homes across the state is getting higher,” said Mark Lauseng, executive director for the South Dakota Housing Authority. “The number of inmates wanting to get into the program has also increased because this is a high-demanding position.”

According to Lauseng, inmates at Mike Durfee State Prison go through a hiring process for positions ranging from plumbing, electrician,  and carpentry.

Once selected, they go through classroom training before the internship work.

Since the program's inception in 1996, South Dakota inmates from Mike Durfee have constructed more than 2,800 homes for communities across the state, according to Lauseng.

The number of homes constructed by inmates is part of the reason why state leaders and housing advocates in Iowa turned to the state’s prison system for assistance with their own housing shortage.

“Our communities have talked to us for years about issues with housing,” said Mike Norris, executive director at Southeast Iowa Regional Planning Commission. "It was getting more expensive to develop housing. People couldn't afford to build like they could in the past and they asked us to try and find solutions. We approached Iowa Prison Industries to help.”

A 2013 study by the Iowa Finance Authority revealed that a total of 130,000 single-family homes built at an annual rate of 10,600 units would be needed to accommodate the forecasted growth in employment and workers by 2020.

In Iowa, data shows that more than 59 percent of the state’s population live in big cities like Des Moines and Cedar Rapids, leaving little appeal for developers to build in rural areas.

“This is a self-funding program,” Dan Clark, director of Iowa Prison Industries said. “The homes will be sold for the amount that it costs to build them.”

Iowa officials said the state isn't doing anything different than what other correctional facilities do -- using prison labor to produce goods and services, most famously license plates.

Constructing affordable housing, however, is rare from inmates. South Dakota's program started two decades ago, Iowa just implemented its program this year, and Missouri just launched a program where some inmates serving time at the Northeast Correctional Center build tiny homes through the Proud Green Home project. But jails in places like Florida have also used inmate labor to build homes.

Joshua Goemaat is one of six inmates chosen from Newton Correctional Facility in Iowa to participate in a new apprenticeship program that trains inmates to construct new homes. FOX NEWS/MITTI HICKS

Homes For Iowa says it's planning to build 1,000 homes with the help of inmates within the next decade for rural communities across the state.

“All the men that are here, are going to be released and we made a decision in our state that because they’re going to be released and be our neighbors, we want to improve the odds that they're going to get on the right track when they get out,” Clark stated.  “They’ll get out as an apprentice electrician, a trained plumber, or somebody that knows how to build homes, they have a much, much better chance of being successful.”

As for Joshua Goemaat, he already has a plan upon his release.

“When I get out I’m going to try to go into housing and learn more,” he said.  “I think it just opened another door.  You just feel happy to help somebody else out.”