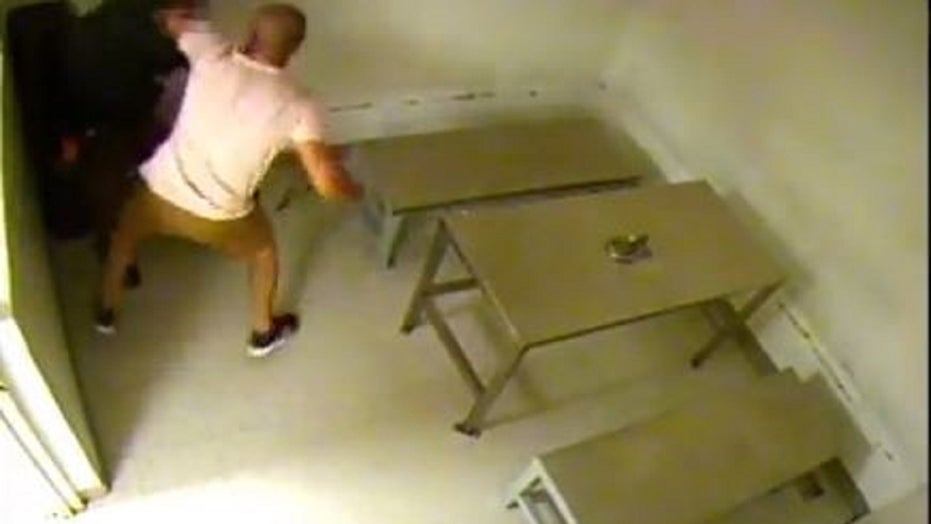 A Miami-Dade police officer was viciously assaulted and knocked unconscious in department headquarters Tuesday night by a suspect while booking him into jail, authorities said.

The inmate had just been fingerprinted around 7:45 p.m. when the unidentified officer issued verbal commands, which were ignored, police said. As the suspect begins to resist, he is backed into a corner inside a room.

Fox affiliate WSVN-TV identified the inmate as 32-year-old Nestor Rodriguez. Fox News has reached out to the police department.

During the attack, a struggle ensues, and the suspect lands several blows to the officer's head and body, according to video footage released by authorities. At one point, the officer falls to the floor and continues to take multiple punches while unconscious, police said.

After a brief pause, a civilian employee wearing a "forensics" shirt comes in to assist the officer. The melee eventually spills out of the room.

Rodriguez is subdued on the floor and backup officers respond and use zip ties to handcuff him.

"The continued violence against our law enforcement officers is unacceptable and will not be tolerated," Miami-Dade Police Director Alfredo Ramirez said in a statement. "We must come together as one to protect our community and our police officers from those that chose to engage in vicious acts."

The incident came less than 24 hours after another officer sustained a bite to the head during a brawl inside Miami International Airport. The attack began when a passenger upset about a flight delay took an airport golf cart.

The man is seen talking to the officer as he appears to walk away and grabs his arm and asks him to listen.

The officer pushes the man off the cart and onto the floor. Several people are visibly upset at the officer.