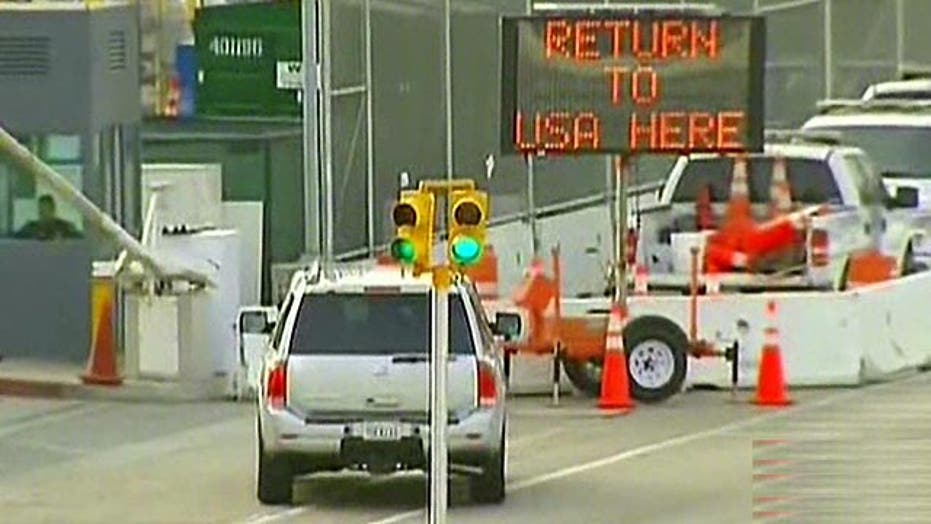 How easy is it to make wrong turn and land in Mexican jail?

A U.S. Marine who has been held in a Mexican jail for two months after mistakenly crossing the border with guns could have been spared his continuing ordeal with a simple phone call - and the kind of courtesy American border officials extend to wayward Mexicans, including members of the military.

Andrew Tahmooressi, 25, was trying to visit a friend near the border in San Ysidro March 31 when he missed the last exit on Interstate 5 and inadvertently crossed into Mexico. While his mistake was apparently due in part to a poorly marked - and recently changed - sign marking the last chance to make a U-turn back toward the U.S., some reasonable discretion by border officials could have spared him nearly two months in a Mexican prison, sources told Fox News.

"This should have been a phone call," said a border patrol supervisor who used to work the San Diego sector. "I would call my counterpart on the south side, call in a favor and Sgt. Tahmooressi would have been back in a few hours. Why that didn't happen here, I don't know. There's no reason Mexico City and Washington should be involved in something like this."

Thad Bingel, a former chief of staff at Customs and Border Protection agrees, saying it is not uncommon for Mexican soldiers to get lost along the border. They are typically met by the U.S. Border Patrol, questioned and sent on their way.

"We had several incidents where Mexican military or federal police or local police inadvertently crossed the border, armed, on the U.S. side and were apprehended by us," said Bingel. "We were able to usually dispense with those cases pretty quickly and get them back home once we established the intent wasn't there to do anything nefarious. I really can't explain why it has taken the Mexican government this long. If they're trying to make a point about broader issues of arms smuggling southbound, I think they've picked really the wrong case to do that with."

Customs and Border Protection spokeswoman Angelica De Cima said it is not uncommon for travelers to miss the U-turn lane, but her agency does not keep statistics.

"He's not trying to smuggle arms southbound," said Bingel. "He made a wrong turn.  He had weapons in the car.  He was arrested for that.  But he's certainly been held long enough to determine his intent and to send him home to his family."

Border Patrol and ATF officials tell Fox News Tahmooressi is not a gun smuggler. However, he did carry a military assault rifle, a shotgun and pistol. Guns are illegal in Mexico and the "AR-15 definitely got their attention" said a source familiar with the investigation. "They don't have much of a sense of humor about assault weapons."

Mexican officials have told their American counterparts Tahmooressi changed his story, hence their suspicion. At first, they claim, he said he was going to see friends and get medical care. Later, he allegedly said he made a mistake.

Tahmooressi's mother, Jill, claims that is not accurate.

"The first customs official believed my son when he said he made a wrong turn and called for an escort to take him back. Then there was chatter over the radio and the Mexican military got involved. He was arrested, put in handcuffs, and held for eight hours."

The state department claim it is working with Mexico's on the veterans' release.

"Within  a foreign country, a U.S. citizen is subject to that country's laws and regulations, which sometimes differ significantly from those in the United States," State Department spokeswoman Jen Psaki said Thursday. "Obviously, this is a case we've been concerned about. Hence, we've raised it and we visited him 11 times. So we'll continue to press the case."

Others want a more immediate, direct approach, noting the U.S. gives Mexico roughly $400 million a year in aid, from military and police training to social aid and child health. The US is also Mexico's chief source of tourism. A former border official suggested slowing southbound traffic, cutting off the cash flow.

"That will get their attention," he said. "Is it related to the missing Marine? Of course not. But if he suddenly showed up in the northbound lane, traffic might improve."

Bingel admits the U.S. has leverage it doesn't appear to be using.

"There really seems to be no excuse for why someone at the State Department, from the Secretary of State on down, can't make that phone call and use a number of tools in the diplomatic arsenal, whether that's direct foreign aid to the Mexican military or police, or whether it's various economic provisions and trade provisions between the two countries," he said.