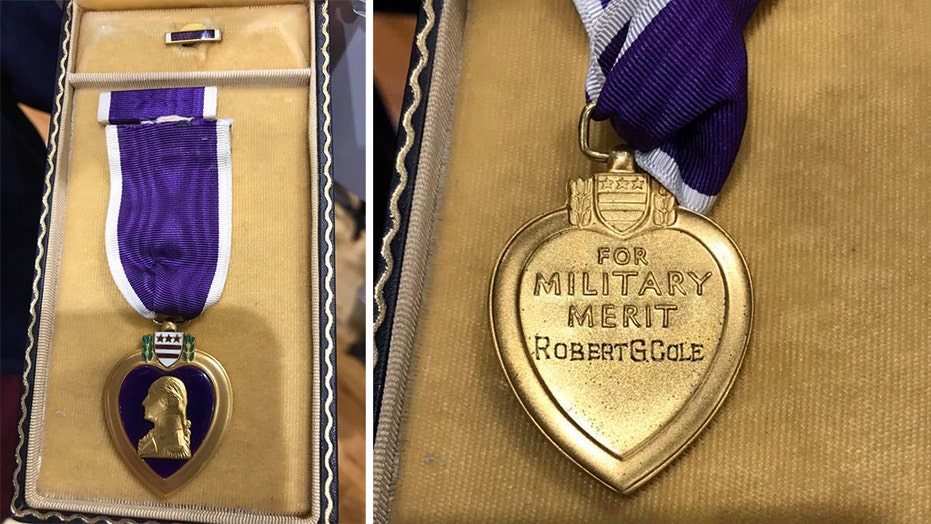 A Purple Heart belonging to a World War II Medal of Honor recipient from Texas that had been lost for decades was bought by a woman at a gun show on Long Island, N.Y., this past September for $60 -- and on Friday, she donated it to a Texas school bearing the name of the honoree.

The medal was presented at a Veterans Day ceremony to Robert G. Cole Middle and High School in San Antonio, at a ceremony in front of 750 students.

"The kids went nuts. When we dismissed them to go back to class, they just poured out of the stands and everyone wanted to see it,” retired Army Col. William LaChance, who has run the Reserve Officers' Training Corps [ROTC] program at the school, told News 12 Long Island.

A Purple Heart belonging to Medal of Honor recipient Robert G. Cole turned up at a Long Island gun show after being lost for decades. (Fox 29 San Antonio)

FRANCIS CURREY, ONE OF THREE REMAINING WWII MEDAL OF HONOR RECIPIENTS, DIES AT 94

The medal originally was presented to Army Lt. Col. Robert Cole. However, the award eventually made its way to the gun show, where Lisa Ludwig of West Babylon, N.Y., bought it.

The seller was a man who bought military medals from estate sales and resold them, the Rivard Report in San Antonio reported.

The man wanted $120 for the Purple Heart, which Ludwig said she couldn’t afford, according to the news outlet. At the end of the show, he surprised her by knocking his price down to $60.

Ludwig told the Rivard Report she thought she was getting a Purple Heart with no name inscribed on it. She said it blew her mind to discover hers had a name.

She said when the seller realized his mistake, he asked for it back, saying it was worth as much as $2,500, the news outlet reported.

With the Purple Heart in her possession, Ludwig said she then researched Cole’s background and got an even bigger shock.

The Purple Heart was shown to students at a Veterans Days ceremony at the school in San Antonio, Texas, that bore his name. (Fox 29 San Antonio)

Cole was awarded the Medal of Honor for leading a battalion against dug-in German forces near Carentan, France, five days after he and his men parachuted into Normandy on D-Day, officials said.

Three months later, a German sniper killed Cole in the Netherlands. A month after that, on Oct. 30, 1944, his widow, son and mother were presented his Medal of Honor and Purple Heart at a ceremony in Texas.

LaChance told the Rivard Report officials have been unable to find any other relatives of Cole still living.

“What a huge piece of history,” LaChance told the news outlet. “Even though Robert G. Cole never had it pinned on his chest, I feel like now we have a piece of him, and that’s important for the kids.”

LaChance said it’s been decades since anyone has seen Cole’s Medal of Honor.

Ludwig told the Rivard Report she felt wonderful about donating the Purple Heart to the school.

“It’s a beautiful story,” Ludwig said. “I felt very warm-hearted and full-hearted and very American. That really made me feel like such a good American, and I’m so happy that it’s where it should be.”