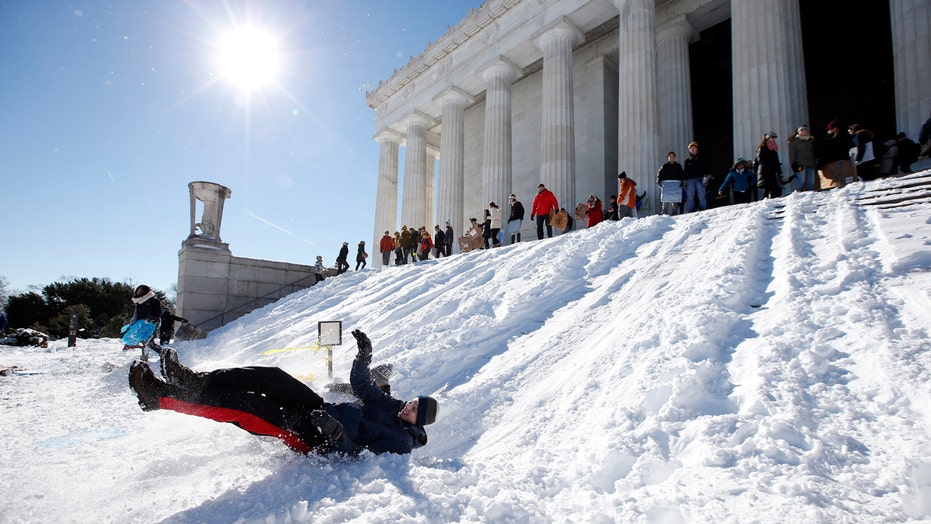 How much snow fell on Washington D.C. during this past weekend's massive snowstorm? Officially, 17.8 inches. But the actual answer may never be known.

The Washington Post reports that the snow-measuring device used by a team of weather observers at Washington's Reagan National Airport was buried in the blizzard, leaving them with no way to record the true amount of snow for hours on end.

The error promped the National Weather Service (NWS) to announce that it will be looking into the procedures used at Reagan National, where the official snow totals for the nation's capital are recorded.

The team at Reagan National, in Arlington County, Va., use a device called a snow board, in keeping with the requirements of the NWS. The board is supposed to be placed on the ground in a location where it will not be affected by high winds or drifting snow. It is supposed to be wiped clean and replaced every six hours.

According to the Post, 17.8 inches of snow had fallen at the airport as of 8 p.m. local time Saturday. Although snow fell for at least another four hours, 17.8 inches was the final measurement submitted to the NWS.

The Post reports that the board was buried by snow sometime Friday night and could not be located. Instead, the weather observer made a series of measurements of snow depth and averaged them.

By contrast, weather observers at the other two major airports in the Washington D.C. area — Dulles Airport in northern Virginia and Thurgood Marshall-Baltimore Washington International Airport in Maryland — recorded 29.3 and 29.2 inches of snow, respectively.

However, the Post reported that other snow readings taken nearer the airport were closer to the Reagan National team's total. 19.4 inches were recorded in Crystal City, Va., approximately one mile north of the airport, while 22 inches were reported at the White House, about 3.5 miles away.

On Sunday, Mark Richards, the senior weather observer at National, stood by the accuracy of the reading, saying his team did the best it could under tough conditions.

"Everyone has to understand that measuring snow in a blizzard is a tough thing to do," Richards said. "We would like it to be as accurate as possible," he said. "But it's an inexact science."

However, Bob Leffler, a retired NWS climatologist told the Post that the loss of the snow board may have resulted in Reagan National's observers underreporting the true total amount of snowfall by between 10 and 20 percent, which would make the true total between 19.5 inches and 21.4 inches.