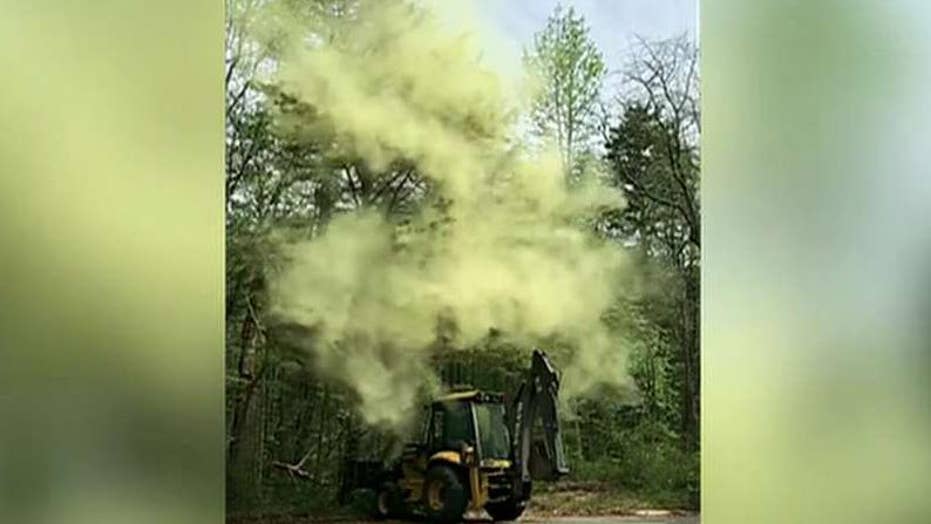 So how bad is the pollen this season across the Northeast? A New Jersey resident decided to find out Monday, reaching a conclusion that may cause some to grab a box of tissues.

Jennifer Henderson, of Millville, N.J. posted a video to Facebook showing her husband tapping a tree while driving a backhoe loader. Shortly after tapping the tree, a massive cloud of pollen being held by the tree is slowly released and descends as the backhoe quickly reverses away.

"When my husband said the pollen’s bad, I probably should’ve taken his word for it," she wrote. "Crazy!"

Julia Lowe Ehrhardt, program coordinator at the Tyler Arboretum in Philadelphia, told FOX29 that blooming maple, birch, and oak trees are the main culprits. A cool April has led to many late-blooming plants, according to Ehrhardt.

"It was like three seasons in one week. Well the plants couldn’t make up their mind, so the early plants are late meaning the cool spring kind of delayed them," she said.

STORMS FIRING UP ACROSS THE MIDWEST AND GREAT LAKES, SIZZLING TEMPERATURES ACROSS ARIZONA

It's not just the Northeast suffering from high tree pollen, according to AccuWeather. A large swatch of the country, from the Great Plains to the Mid Atlantic, is listed as "moderate" to "high."

Experts advise those suffering from allergies should keep windows closed to prevent the pollen from getting inside, and people should wash their hands and faces after going outside.