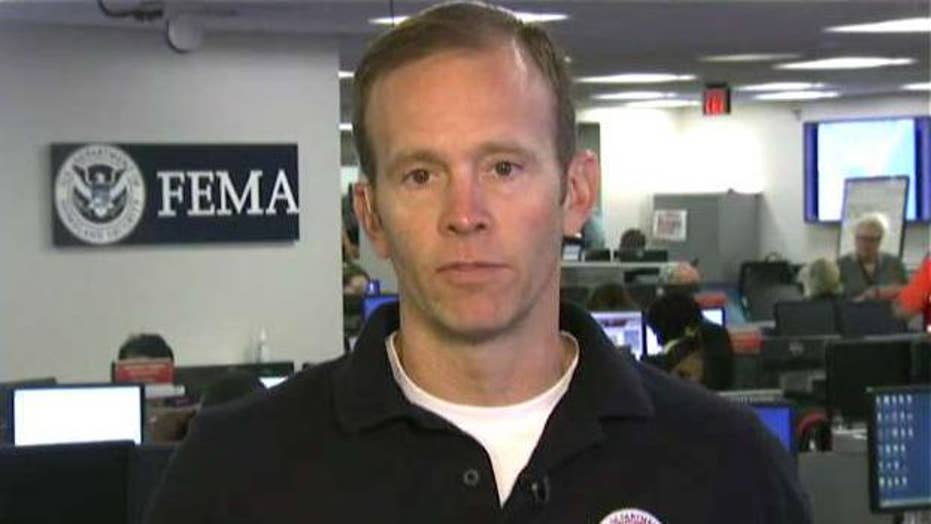 With the arrival of what is one of the most devastating storms to ever hit Florida, officials have set aside nearly 1 million gallons of water, filled 67 trailers with meals, and amassed 24,000 tarps.

They also have asked the federal government to kick in 11 million meals and millions of more gallons of water, plus nearly 700 cases of baby supplies.

But emergency officials won’t know if they have enough supplies until it is finally safe to start recovery efforts.

Some of the challenges the state in the immediate aftermath of the storm will be: Restoring power across the state, removing debris from roads, dealing with possible fuel shortages, and making sure nursing home and hospital patients who were evacuated can safely return.

State officials are also fearful the massive rain that was soaking the state could also lead to flash floods.

Hurricane Irma made landfall in the Florida Keys on Sunday morning with top sustained winds of 130 mph. While the projected track showed Irma raking the state's Gulf Coast, forecasters warned that the entire Florida peninsula — including the Miami metropolitan area of 6 million people — was in extreme danger from the monstrous storm, almost 400 miles (640 kilometers) wide. Nearly 7 million people in the Southeast were warned to get out of the storm's path, including 6.4 million in Florida alone.

More than 4.2 million residents have lost power, and it could be days before officials can provide food and water to those struggling in the aftermath of the powerful storm.

Speaking on "Fox News Sunday” as Irma began its assault on Florida on Sunday morning, Long called the storm a "complex event" in particular because of its movement from the southern part of the state to the north.

"The power's going to be out for a long time. It's going to be tough for us to get in to perform search and rescue in South Florida. We have to wait till all the elements pass through," he said. "Once this system passes through it's going to be a race to save lives and sustain lives."

Florida has already spent $77 million ahead of Irma's arrival. Scott has called up and sent out 7,000 National Guardsmen across the state, some of whom have been dispatched to the more than 400 shelters that have been set up.

Meanwhile, search-and-rescue teams located in Orlando and other staging areas were waiting out the storm until it was safe enough to go out and assess the extent of the damage and injuries. One of the teams was preparing to fly into Key West, directly in the path of the storm.

About 11,000 utility workers from across the country will be heading to Florida to assist in recovery efforts as well.

ComEd, a utility company based out of Chicago has already sent a crew of 700 volunteers to assist with power restoration. They are expected to spend at least two weeks assisting with efforts.

“I’m looking forward to the opportunity to go and help individuals that are going through a hard time right now, and hopefully turn their lights on and bring back, at least, small conveniences,” ComEd worker Larry White said to CBS Chicago.

Frist responders from Philadelphia will be heading down to Florida in a show of their trademark brotherly love to help with recovery efforts.

The state of Michigan will be sending over 1,000 soldiers and first responders, including a task force that is capable of surface water rescue, wide-area searches, structural collapse, canine and technical search, according to The Detroit News. They will be joining other task forces from Florida, Wisconsin, and Tennessee before receiving their assignment from a staging area in Jacksonville.