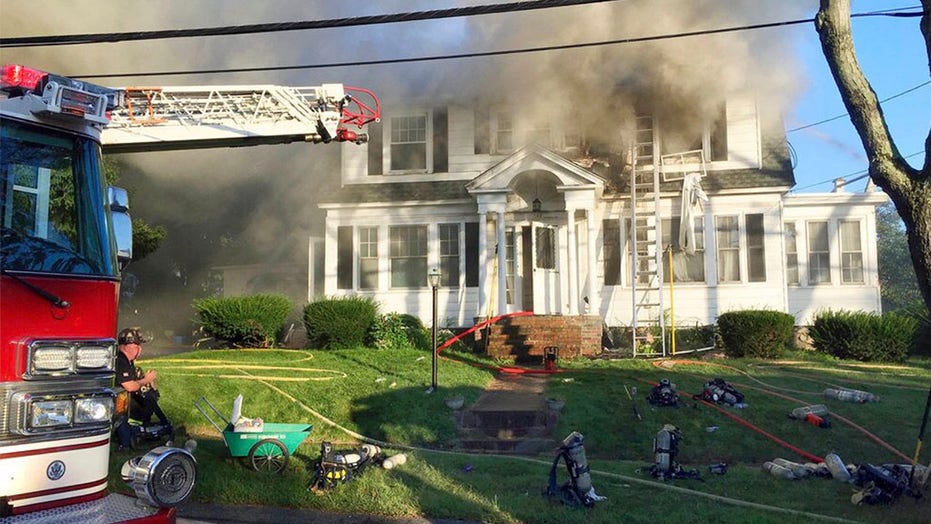 A Massachusetts natural-gas company has been sentenced to pay a $53 million fine and sell its business after a series of explosions in 2018 that left one person dead, injured 22 and damaged homes and businesses in Merrimack Valley.

On Sept. 13, 2018, a series of pipeline explosions went off in Lawrence, Andover and North Andover -- blowing up five homes and killing 18-year-old Leonel Rondon, who was parked in his friend’s driveway when a chimney collapsed and crushed him. He had gotten his driver’s license just hours earlier.

Fires went on to damage more than 120 structures.

The Department of Justice (DOJ) announced the penalty against Columbia Gas of Massachusetts Tuesday, calling it “the largest criminal fine ever imposed under the Pipeline Safety Act.”

Firefighters battle a house fire in North Andover, Massachusetts, as one of multiple emergency crews responding to a series of gas explosions and fires triggered by a problem with a gas line that feeds homes in several communities north of Boston. (AP Photo)

“We expect utility companies operating in our communities to do so safely and responsibly,” said U.S. Attorney Andrew E. Lelling, of the District of Massachusetts. “Instead Columbia Gas acted with reckless disregard for safety by cutting corners and relying on lax protocols. The result was catastrophic -- stealing one life, harming dozens and impacting the home and livelihoods of hundreds more.”

Prosecutors said the company knew it had problems with its gas pressure regulator stations as far back as 2015. The fine represents “twice the amount of profits” that the gas company earned between 2015 and 2018 from its pipeline infrastructure program.

“Today’s sentence serves as little comfort to the victims, but is another step towards terminating Columbia Gas’s business in Massachusetts,” Lelling said in a statement Tuesday.

Columbia Gas had agreed to plead guilty to violating the Pipeline Safety Act in February, and the record-setting penalty is in line with the plea deal reached at the time, although the company will also be placed on probation and monitored by state and local regulators.

Massachusetts Gov. Charlie Baker tours the site where an 18-year-old man was killed during a gas explosion in Lawrence, Mass., Sept. 14, 2018. (AP Photo)

After the plea deal was announced, Eversource said it agreed to buy Columbia Gas’ natural gas assets for $1.1 billion.

“Pipelines are a critical part of our nation’s infrastructure, and working with our federal, state and local law enforcement and prosecutorial colleagues, we will continue to protect the safety and integrity of our pipeline transportation system from violations of regulation and law,” said Douglas Shoemaker, the regional special agent in charge for the Department of Transportation’s inspector general.

NiSource, the parent company of Columbia Gas, also agreed to stop operating in Massachusetts after it sells off the subsidiary. It still operates in Indiana, Ohio, Pennsylvania, Maryland, Kentucky and Virginia.

NiSource has agreed to forfeit any profit it may earn in the Columbia Gas sale and will implement safety recommendations from the National Transportation Safety Board, according to the DOJ. The company also agreed to make voluntary restitution payments to the victims.

The $53 million fine will go to the DOJ’s Crime Victims Fund.