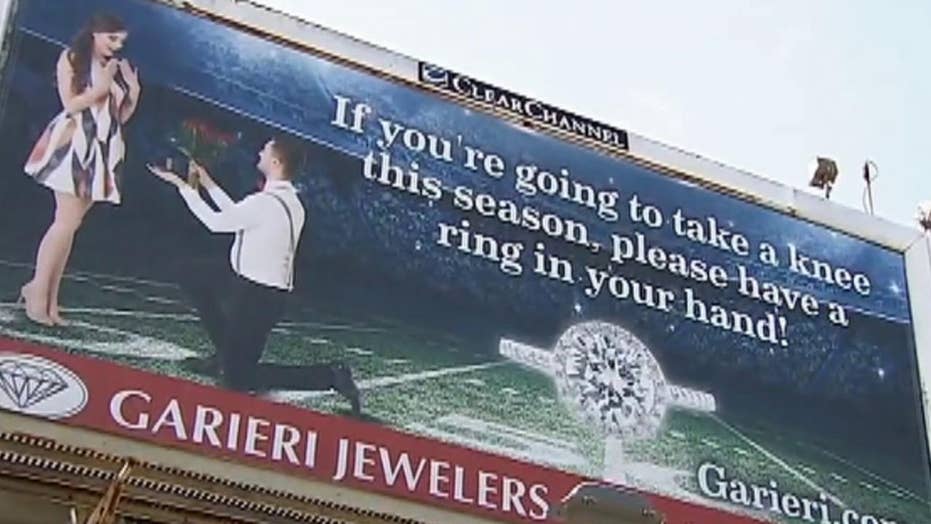 Some say the Massachusetts billboard sends a racist message.

A jewelry store in Massachusetts has come under fire after their billboard showing a man proposing to a woman on the football field was called racist.

The billboard advertising Garieri Jewelers in Sturbridge, Mass., reads: “If you’re going to take a knee this season, please have a ring in your hand!” The billboard, which was located on Route 20 in Charlton, was set up on Saturday.

Scott Garieri, the owner of the store, said the advertisement was meant to be “attention-getting” and was a “play on words” regarding NFL players kneeling during the national anthem. Former San Francisco 49ers quarterback Colin Kaepernick started kneeling during the national anthem to protest police brutality, racial inequality and other issues. President Trump has been a vocal critic of the protests.

"It was intended to be attention-getting," Garieri told Boston 25 News.

“The way that the football season was, everyone had a thing about taking the knee,” he told the Washington Post.

He said the reactions to the billboard were at first positive until one driver, traveling down Route 20, took a picture of it and posted it on Facebook, calling it racist.

"Someone saw it, pulled in off Route 20 and took a picture of it and then went off about how racist it is," Garieri told Boston 25 News. "Then they started attacking us, they wanted to come in and vomit on the [jewelry] cases, they were going to urinate on our sidewalks."

Comments flooded into social media including one that said Garieri’s daughter, Alexandria, who manages the store, should kill herself.

“That’s when it started to get out of hand,” Garieri said.

“We want to sell engagement rings. We’re selling love, not hate,” Alexandria Garieri told the Washington Post. “We were never wanting to be offensive, it was always meant to be satirical.”

The controversial ad by Nike featuring Kaepernick aired just a few days after the billboard was put up.

Garieri said the billboard was staying up despite the backlash.

"It wasn't meant to be racist, business is business," he said.