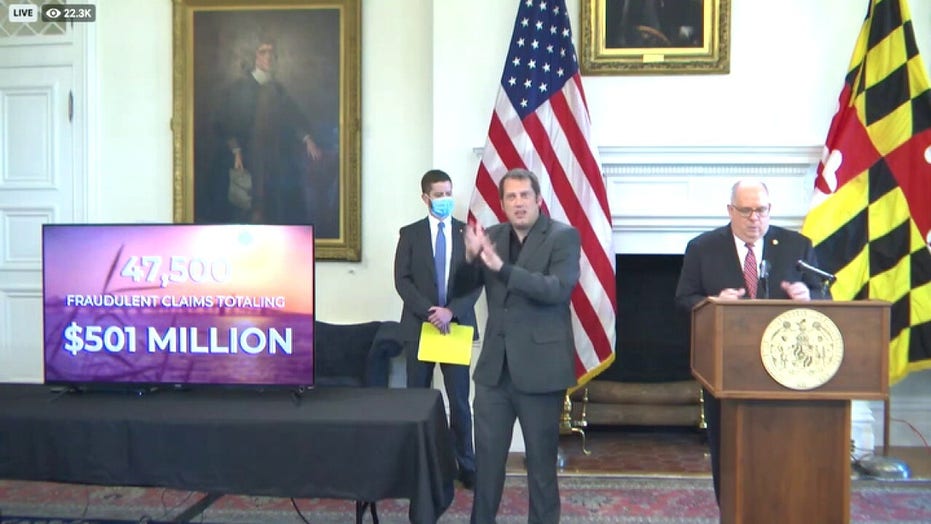 Gov. Larry Hogan on exposing a half billion in fraudulent unemployment claims

The Maryland Governor revealed that officials have discovered a massive identity theft ring focused on defrauding the state's unemployment system.

The scheme involved identity theft from previous security breaches and did suggest that any of the personal information submitted in the legitimate claims had been compromised in any way.

“This criminal enterprise seeking to take advantage of a global pandemic to steal hundreds of millions, perhaps billions, of dollars from taxpayers is despicable,” said Hogan speaking from a press conference Wednesday.

The governor said the fraud was detected when state employees with the unemployment insurance website noticed an unusual uptick in the number of out-of-state claims being submitted, prompting an investigation and eventually notifying federal authorities.

“It is obviously a coordinated criminal enterprise because this is not just random people in their basement that stole somebody’s identity," Hogan told reporters.

Robinson said that they were able to save taxpayers "hundreds of millions of dollars” by catching the scheme quickly due to the heightened security measures in place.

"We will continue to work with our state and federal partners to prevent fraudsters from capitalizing upon the hardships caused by the coronavirus during these already difficult and uncertain times,” she added.

Hogan did note that a few “real” people did get their accounts frozen and that the Labor Department would work quickly to get them their payments.

Derek Pickle, acting special agent-in-charge of the Office of the Inspector General at the U.S. Department of Labor, said the nation was seeing a significant increase in unemployment insurance fraud since Congress passed the first stimulus package. An estimated 12 states have seen similar fraud schemes.

“To give you a sense of how that spike corresponds to our work, unemployment insurance fraud investigations have historically made up approximately 10 percent of our agency’s investigative workload," Pickle said at Wednesday’s press conference.

State and federal offices are coordinating together to locate and prevent fraudulent claims, though Hogan said they did not yet know whether the offenders were based in the U.S. or overseas.