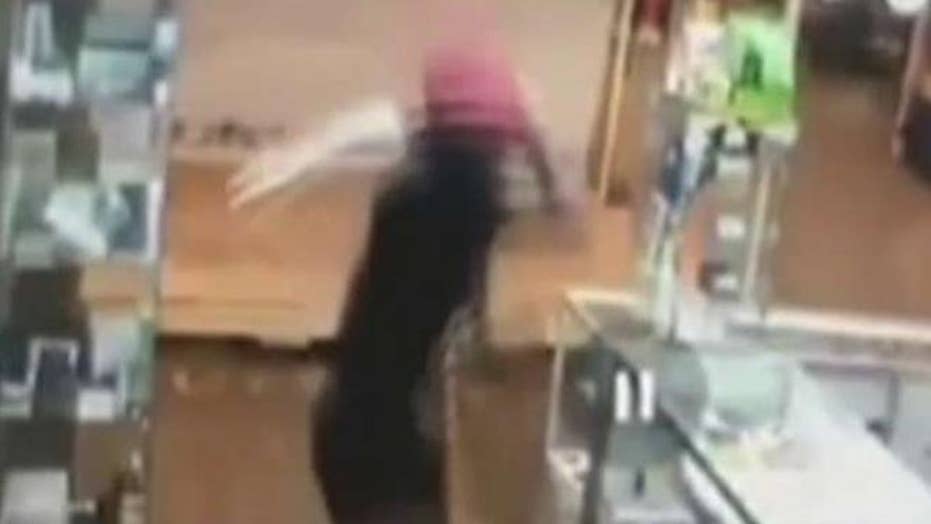 A man in Florida is suspected in a pair of seemingly random assaults on Sunday morning, including one in which an elderly man was attacked with a samurai sword.

Jovaughn Walker, 21, is facing attempted murder, aggravated battery, carjacking and drug possession charges, according to the Sun Sentinel. Police said they stopped questioning Walker after he claimed to be “seeing poltergeist and wanting to kill all that was evil.”

“I have seen the [surveillance] video tapes, and these attacks seem to have come out of the blue,” Maj. Rick Rocco told the Sun Sentinel. “It doesn’t look like he had any argument or confrontation. All of a sudden, he just snapped.”

Walker allegedly began his manic morning by carjacking a 2001 Ford Ranger from a man stopped at an intersection. The man said Walker twice tried to run him over before finally driving away.

Walker then allegedly pulled into a gas station just after 10 a.m., followed a man inside and began beating him on the head with a metal rod. The man later needed 18 stitches after suffering several lacerations to his forehead.

After fleeing the gas station, Walker reportedly arrived at a Swap Shop an hour later, where he grabbed a samurai sword from a store display, chased a clerk and began striking him with the sword.

The 49-year-old clerk, struck by the sword eight times, only sustained a laceration to his left hand.

Bystanders were able to corner and restrain Walker in the Swap Shop until cops arrived.

Walker is being held without bond.