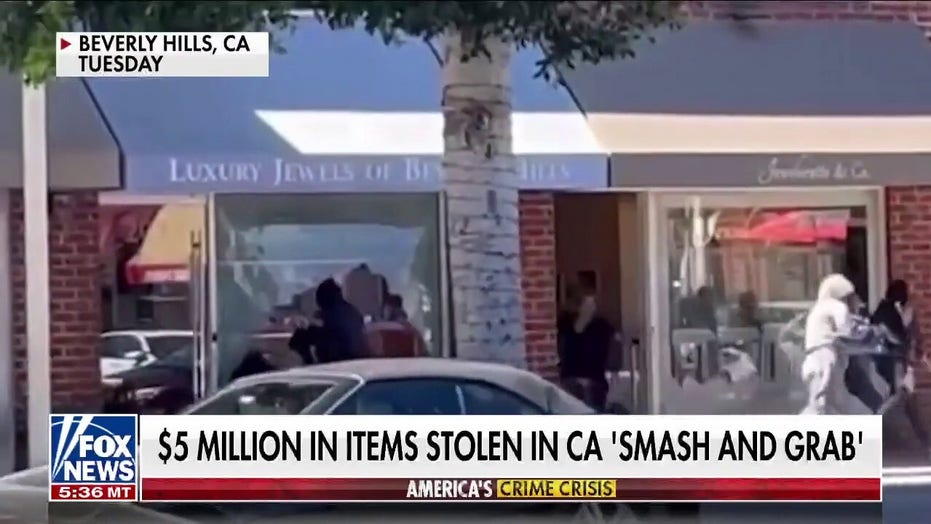 Smash-and-grab suspects targeted a Beverly Hills jewelry store in broad daylight, making off with up to $5 million in merchandise.

Robberies in Los Angeles involving a firearm have increased 44% this year, the city's top cop said Tuesday, who noted that authorities are seeing an increase in the level of violence used during such crimes and that those wearing expensive jewelry could be targeted by thieves.

The message from LAPD Chief Michel Moore confirmed what many residents and business owners already suspected amid a crime surge and uptick in robberies in general.

"There's been a marked increase of armed robberies involving victims wearing expensive jewelry, as well as just other individuals whether they're at commercial stores such as mini markets, convenience stores, gas stations, or on the street," Moore said in an LAPD bulletin. "Most concerning is that there has been an increase in the levels of violence used during these robberies and the frequency in which a firearm was used." 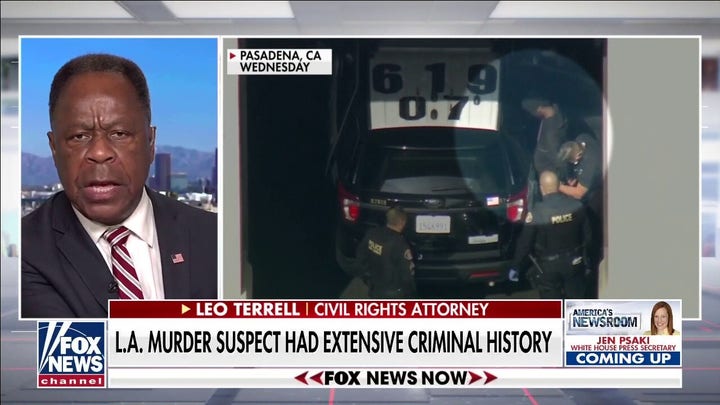 "Numerous arrests have been made and federal and state prosecutions are being pursued," the LAPD said.

As of March 19, there were nearly 2,000 reported robberies compared to 1,690 in the same time frame in 2021. The year-to-date total figures show that robberies involving a firearm account for 74% of the city's robbery increase as well as 36% of all robberies.

Robberies involving a firearm were up 44% this year, Los Angeles' top cop said this week, warning that anyone wearing expensive jewelry could become a target for thieves.  (LAPD)

"This increase in gun crimes should be a stark reminder of the dangers our residents face every day," the union's board of directors said in a statement to Fox News. "It is incomprehensible that during this gun crime epidemic that the (Los Angeles) Police Commission would enact a policy to curtail legal car stops, stops that take guns off our streets. Angelenos are fed up and this election we hope they will vote for candidates that care more about residents than criminals." 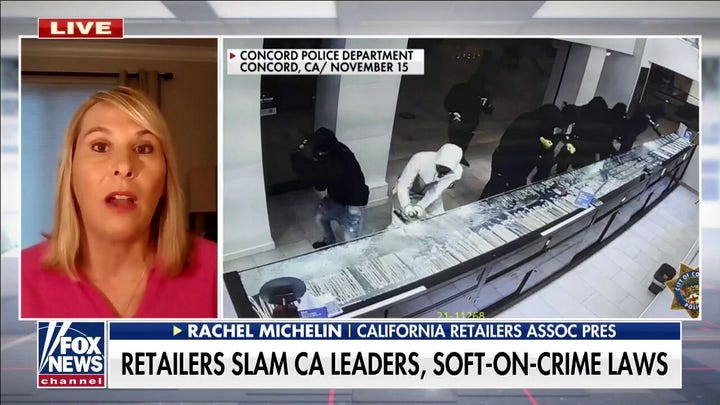 In an effort to deter opportunists, Moore urged people to take different routes home and pay attention to vehicles and pedestrians, referencing an increase in robberies in which victims were followed home from public spaces by thieves.

He encouraged victims not to resist robbers, to travel in groups, and remain in well-lit areas. Los Angeles County has seen some of the most brazen robberies amid a nationwide crime wave that began in the midst of the COVID-19 pandemic.

Many suspects have looted retail stores in smash-and-grab jobs, some violently. Other incidents have ended with deadly consequences, such as the Beverly Hills home invasion in which Jacqueline Avant, wife of legendary music executive, Clarence Avant, was allegedly shot and killed by a suspect.

Robbery suspects held victims at gunpoint and demanded to be let inside a Los Angeles home, video shows. (RING)

On Tuesday, five masked thieves dressed in black used sticks or sledgehammers to make off with $5 million worth of merchandise, in broad daylight. A video of the incident shared on Instagram by Street People of Beverly Hills shows the suspects in front of a shattered store window and appearing to take items and fleeing on foot.

Fox News has reached out to the Beverly Hills jewelry store owner for comment.