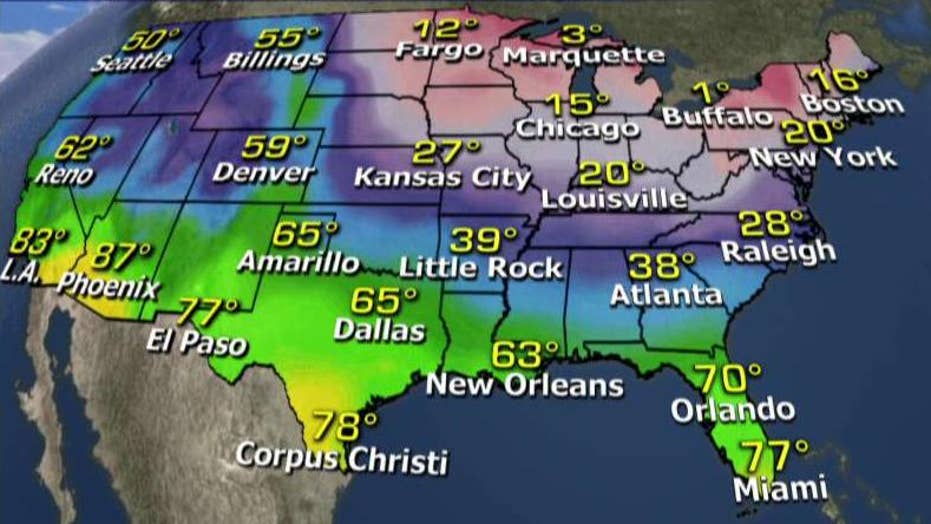 The coldest temperatures of the winter are expected for much of the United States over the Valentine’s Day weekend, bringing possibly record-breaking temperatures to the Northeast and subzero temperatures in parts of the Midwest.

A southward dip of the polar jet stream, bringing cold air from the Canadian Arctic, is being blamed for the plummeting temperatures that could affect states from California to South Carolina. The cold front is expected to arrive on Friday and continue through Valentine's Day.

Meanwhile, the National Weather Service forecast scattered and localized heavy snow showers in Southern New England on Wednesday that could drop another 4 inches of snow, but are more likely to leave behind an inch or so.

Following predictions of up to 18 inches in some parts of New England, the totals for the hardest hit areas by the time the snow ended Tuesday morning were: 11 inches in Falmouth, Mass., and 10 inches in nearby Yarmouth.

New York City, New Jersey and Pennsylvania got much less snow than was originally forecast, but some accumulation was predicted as the storm was expected to last into Wednesday.

Predicted snowfall totals for southeastern Pennsylvania and parts of New Jersey were downgraded to 1 to 3 inches, although a winter storm warning remained in place for parts of Philadelphia's western suburbs, where up to 5 inches was possible. Parts of western Pennsylvania and West Virginia could get more than 6 inches of snow.