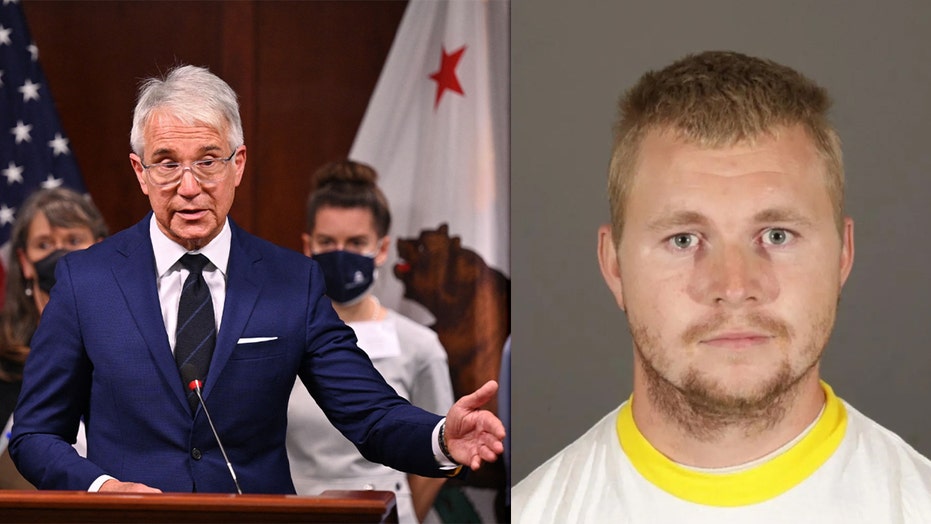 Emails purported to show Los Angeles prosecutors discussing the case of trans child molester Hannah Tubbs last month contradict District Attorney George Gascon’s claim he wasn’t aware of them until after sentencing, according to a deputy district attorney who said he’s seen them.

Gascon said in a statement Sunday that he had not been aware of sickening recordings, in which Tubbs gloated about a lenient plea deal and disparaged the child victim in vulgar terms. He also admitted that Tubbs went on after the 2014 attack to commit other offenses – including one in which DNA evidence linked her to the Denny’s assault.

"If we knew about her disregard for the harm she caused we would have handled this case differently," Gascon said.

Hannah Tubbs began identifying as female after being arrested in connection with a 2014 child molestation case, according to prosecutors.  (Robyn Beck / AFP | Los Angeles County)

Alex Bastian, Gascon’s special adviser, said on "America’s Newsroom" earlier in the day that "the content of these jail calls was something that we did not know about" until Fox News’ Bill Melugin asked for comment on the alarming statements Tubbs made in calls with her father between November and January.

"That statement that Alex Bastian made is completely untrue," Hatami said. "And it is a slap in the face to the victim in this case."

He pointed to a Los Angeles Times report in which Bastian went on the record to state that senior aides in Gascon’s office knew about the calls.

Hatami said that he has seen emails that show discussion of the calls circulated at the highest levels of Gascon’s office – and that they should be available under California’s open records laws.

"I’ve seen emails, emails that show that George Gascon and his chain of command knew about those jail calls well before Bill Melugin published them," Hatami said. "We have a DA who completely lacks any transparency, who’s sending a spokesperson on the news to say things that just aren’t true."

Fox News has requested the documents, but authorities have not yet responded.

Fox News on Monday published shocking jailhouse audio recordings between Tubbs and her father mocking the victim in explicit terms and gloating over the lenient terms of the plea deal – which do not require her to register as a sex offender.

Bastian did not immediately respond to a request for comment Tuesday.

But at a livestreamed news briefing Tuesday, Gascon fielded several questions about the Tubbs case. He doubled down on his claim that he didn't know about the jailhouse calls until last Thursday.

In a statement, she told Fox News Monday that Tubbs’ lenient treatment was a miscarriage of justice, "insulting and "unfair" to her as a victim.

"The things he did to me and made me do that day was beyond horrible for a ten-year-old girl to have to go through," she said. "I want him tried as an adult for the crimes he committed against me."

Gascon is under intense pressure from his own deputies as well as the public amid a second recall petition in just over a year in office. The Los Angeles Association of Deputy District Attorneys Wednesday voted by a 97.9% majority to support the recall effort against their boss.

Neama Rahmani, a Los Angeles-based former federal prosecutor, told Fox News Digital Tuesday that the heightened scrutiny now is too little, too late since Tubbs has already been sentenced to two years in a juvenile facility – of which she could serve as little as two months.

"Gascon is either lying or poorly managing his office," he said. "Either way, it’s a very bad look for someone who is facing a recall. And it’s even worse for the victim of sexual assault. Who didn’t receive the criminal justice she deserved because of Gascon’s blanket policies."

However intense criticism of those policies came to a head last week, when Gascon began backpedaling.

Last Wednesday, Gascon’s chief deputy Sharon Woo sent a memo to prosecutors easing up on a blanket ban on seeking to try juveniles in adult court.

At the time, Gascon’s office denied the move had any connection to the Tubbs case and instead said the change came as prosecutors await a series of state Supreme Court decisions that are expected to send multiple cases back to Los Angeles.

Then on Friday, in a series of five memos sent to staff, Gascon softened his other directives, saying exceptions could be made to once again bring charges that would carry sentences of life without parole and allow juveniles to be tried in adult court. He will continue to block his office from seeking the death penalty.

Gascon conceded that he’d come to accept his policies were too rigid "after listening to the community, victims and colleagues."