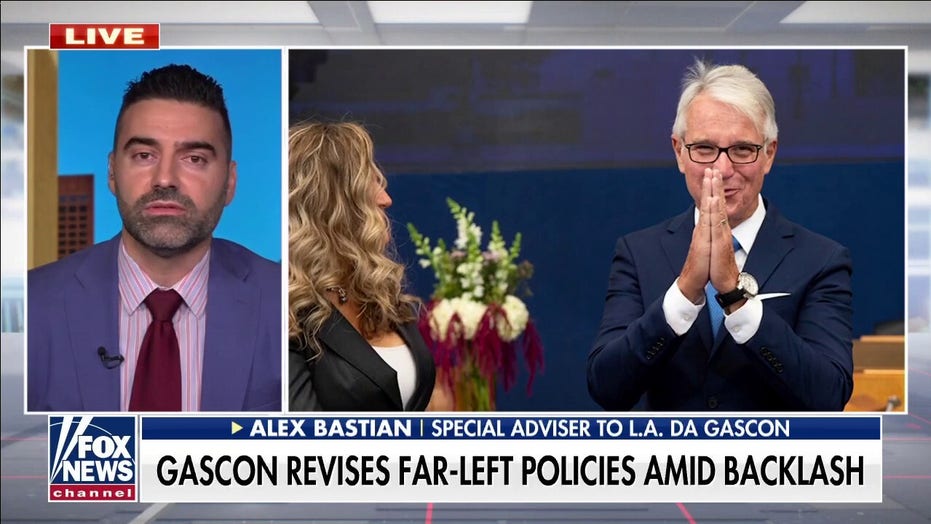 The recordings depict Tubbs admitting it was wrong to attack a little girl but gloating over the light punishment.

"I think when the jail calls were brought to light by Bill Melugin…Fox News correspondent, I was shocked. I was disturbed. And as I began to look into whether the executive team of the DA knew about it, it was clear nobody knew about the contents of these jail calls," Bastian said on "America's Newsroom" Tuesday.

He added that "unfortunately...at times, certain key information is not getting to the front office" of Gascon's executive office "as soon as expeditiously as it should."

But Eric Siddall, vice president of the Los Angeles Association of Deputy District Attorneys and a critic of Gascon, told Fox News Digital that "the DA's office knew about these recordings" of Tubbs in January 2022.

"He is claiming that his boss, the DA, didn't personally know about the recordings until much later," Siddall said. "That doesn't really comport with the timeline because we know that his executive management team was involved in the Tubbs case in late January. So they were involved at the same time that these calls were discovered."

Siddall continued: "This makes me wonder if they are just utterly incompetent or are they lying?"

Hannah Tubbs began identifying as female after being arrested in connection with a 2014 child molestation case, according to prosecutors. (Los Angeles County)

Bastian emphasized that the recordings are "disturbing" and that the DA's office sympathizes with the victim, now 18, who told Fox News Digital that Gascon’s handling of the case has been "insulting" and "unfair" to her.

"The things he did to me and made me do that day was beyond horrible for a 10-year-old girl to have to go through," she said. "I want him tried as an adult for the crimes he committed against me."

She said the light sentence was offensive, hurtful and offered her "no true justice."

In the recording, Tubbs says he's "gonna plead out to it, plead guilty," and prosecutors are going to put him "on probation, and it’s gonna be dropped, it’s gonna be done."

Tubbs pleaded guilty last month to the cold case attack, which took place in a women’s restroom at a Denny’s restaurant, when the suspect was two weeks shy of 18 and identified as a male named James Tubbs. After being arrested roughly eight years after the crime, Tubbs began identifying as a woman, according to prosecutors.

Tubbs received a sentence of two years at a juvenile facility because Gascon’s office declined to transfer the case to adult court, adhering to one of the progressive prosecutor’s day-one directives barring "children" from being tried as adults. Tubbs could serve as little as six months and won’t have to register as a sex offender.

The case "represents the absurdity of [Gascon's] policies" and is "a prime example that his policies don't work in the real world," Siddall said.

Bastian mentioned a policy change Gascon announced last week requiring prosecutors to get special approval from their chain of command before opposing a motion by defense counsel to transfer a case from adult court to a juvenile court.

"There was a policy put in place...where any of these cases that come back to our jurisdiction — we want to know about them," Bastian said Tuesday.

Siddall argued that the new policy makes no "fundamental change" to the existing policy that seeks to try every individual who commits a crime under the age of 18 as a minor.

"It is really a means to control information and ensure the media hear not about a future Tubbs case," Siddall said of the policy change.