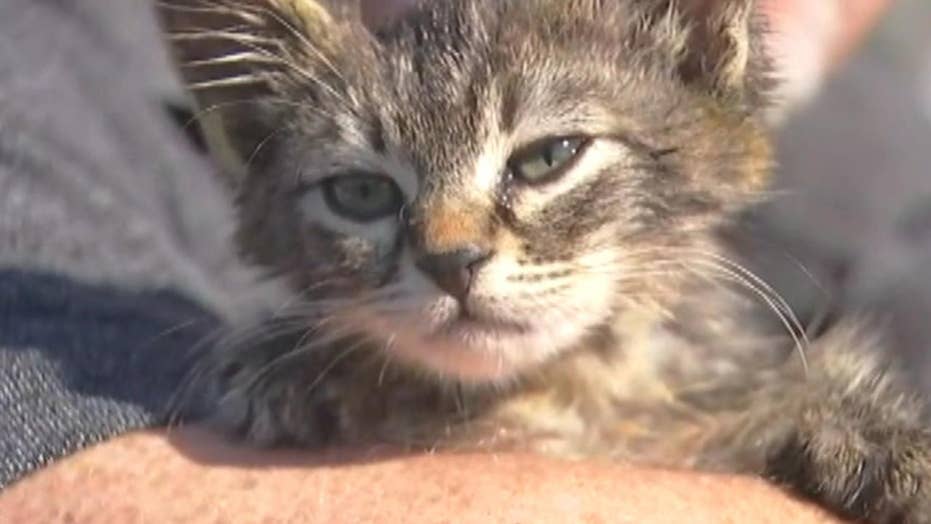 Oregon man saves kitten that narrowly escaped being hit by cars after she appeared to be deliberately glued to the road.

A tiny kitten may have shaved off one of his nine lives after being discovered glued to a busy road in Oregon on Friday.

Chuck Hawley was driving to work on Silverton Road Northeast just outside of Salem around 7 a.m. when he noticed there was something in the road in a busy lane of traffic.

“When I went to pick her up, her feet were stuck to the road, and I’m like, 'uh oh.' So I start to pull her feet up, and it was like a rubber cement, so she was glued to the road.” Hawley told FOX12. “It was all under her neck and then she had a little bit down her side, but it was mostly her tail and her feet.”

The 5-week-old kitten, frightened and cold, had her feet soaked in glue that was "sort of rubbed into the pads of her feet," according to Hawley.

"Sticky" the kitten was found with her feet stuck to a busy road on Friday. (FOX12)

“I think the way she was sitting someone actually went out and put her there,” he told FOX12. “Because there were no glue footprints around, it was just a glob of glue under her, so it looked like someone just took her and put her in the road.”

CAT RESCUED FROM TOP OF LIGHT POLE AFTER ABOUT 12 HOURS OF CALLING FOR HELP, WOMAN SAYS

Hawley took the kitten, now named Sticky, to an animal clinic where staff members had to use mineral oil to get the glue off her tiny paws. Puncture wounds were also found on the kitten's neck, but it's yet to be determined what caused them.

On Monday, Hawley said he spoke with deputies from the Marion County Sheriff's Office, who came to his home to take pictures of Sticky's neck injuries as they investigate how she ended up glued to the road.

The 5-week-old kitten had feet soaked in glue that was "rubbed into the pads of her feet," and had puncture wounds to her head. (FOX12)

The little kitten is expected to make a full recovery -- and wound up getting a new home out of the ordeal after Hawley adopted her.

“The funny thing is we were just talking about getting a cat a couple of nights ago,” he said. “Seems like there’s easier ways for the cat to find us, but if that’s how we’re doing it, okay, I guess that’s how we’ll do it.”