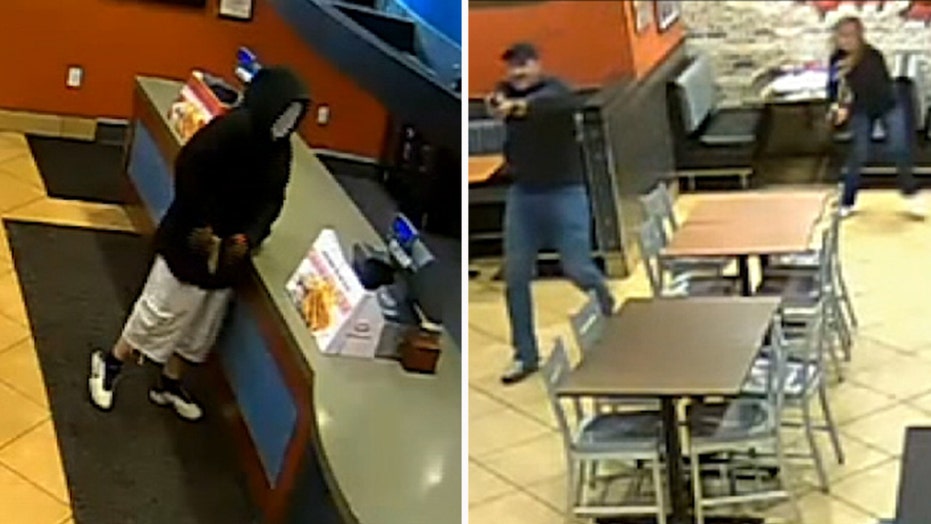 Two off-duty Kentucky police officers, a married couple out for date night, thwarted an armed robbery by springing up from their table at a Lexington fried-chicken restaurant, drawing their guns and chasing the suspect out of the building.

Detective Chase McKeown and Officer Nicole McKeown, both of the Elizabethtown Police Department, have been married for six months and were out for date night at a branch of Raising Cane’s Chicken Fingers at Mid City Mall in Lexington’s Highlands neighborhood Saturday, Louisville's WDRB reported.

That’s when suspect, Justin T. Carter, 30, allegedly entered the restaurant wearing a mask and flashed a gun at an employee several times while demanding money from the register.

Security cameras captured the moment both off-duty officers got up from their table in a back booth, drew their guns and ran to the front of the restaurant. The couple can be seen chasing a man wearing a mask and a black hoodie out of the building.

Carter dropped his weapon and fled on foot, according to a police report. The McKeowns ran after him and held him at gunpoint a few blocks away. Lexington Police Department officers responded to the scene and placed Carter under arrest.

He was charged with first-degree robbery, receiving a stolen firearm and possessing a handgun as a convicted felon. Authorities determined the gun Carter had was stolen from Jeffersontown police, according to the police report. Carter appeared in court Monday and was represented by a public defender. A preliminary hearing is scheduled for Feb. 25.

The McKeowns met on the job at the Elizabethtown Police Department when Nicole was a dispatcher and Chase was a patrol officer.