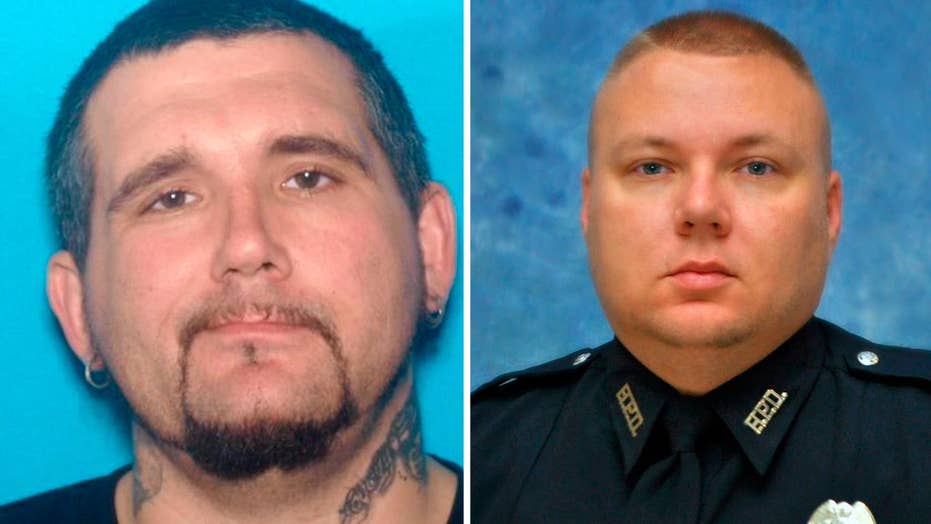 The man accused of killing an off-duty Kentucky police officer was shot and killed during an encounter with law enforcement officers. Mike Tobin reports from Chicago.

Law enforcement in Tennessee killed the man authorities said posed as a cop and fatally shot an actual police officer after pulling him over in his car.

James Decoursey, 34, who was considered armed and dangerous, was killed in Clarksville, Tenn., according to a Facebook post by Logan County Sheriff's Office.

Authorities identified the slain officer as Phillip Meacham, 38. Decoursey was on the run after stealing a white Chevrolet pickup truck.

Gov. Matt Bevin previously confirmed in a tweet that a Hopkinsville officer had died.

Authorities reported to the scene on Paulette Court after 5 p.m., WKRN reported. Hopkinsville is about 70 miles northwest of Nashville.

According to a Hopkinsville Police Department news release, the off-duty officer was pulled over in his own car by someone "pretending to be a police officer." Not long after, the officer reportedly was shot by the suspect. He was rushed to the hospital where he ultimately died from his injuries, authorities said.

Meacham worked for the Hopkinsville Police Department since May 2017 and previously worked at the Christian County Sheriff's Department for about 12 years, officials said at the news conference. The slain officer reportedly was married and had two children.

In a followup tweet, Bevin said "There is no greater sacrifice than that of a person willing to lay down their life for annother...Thank God for the #ThinBlueLine."