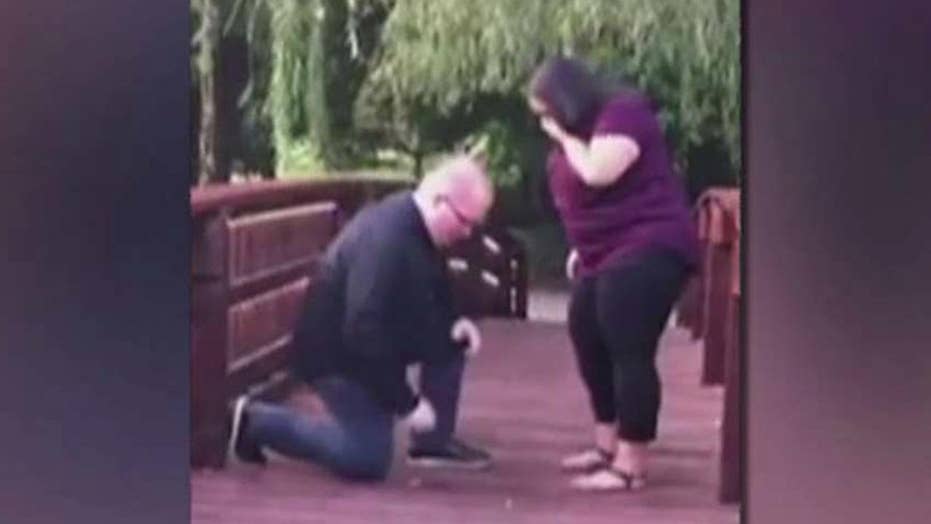 A Missouri man hoping to spend the rest of his life with his girlfriend ended up swimming in an algae-filled pond to desperately search for a $3,000 diamond ring he dropped during his proposal.

Seth Dixon was proposing to his girlfriend, Ruth Salas, in Loose Park on Saturday when the diamond ring popped out of the tiny box he was holding and fell through the slats of a wooden bridge, according to the Kansas City Star.

“We freaked out,” Salas added. “It ping-ponged from one plank to another. You could hear a little plop.”

The unfortunate moment was caught on camera by the couple’s friend, Maddie Villareal. Dixon was seen confidently kneeling down on one knee before dropping to his hands in an attempt to save the ring.

“Oh my gosh,” Dixon is heard saying with the look of shock on his face. He, Salas and Villareal went into the muddy water to try and find the ring.

“There was so much mud and nasty algae,” Villareal recalled. “There were sticks going between my toes. Not my cup of tea, but I didn’t want to leave without the ring. Then it was just getting too dark. And the flashlight was dying.”

The couple went back the next day and hired a man with a metal detector to locate the ring – with no luck.

The couple eventually went to church later that Sunday where attendees decided to join in on the search after hearing about the couple’s story.

“We probably had 25 people there. I think we had like 12 people in the water all at once,” said wedding photographer Staci Dabney, who attends church with the couple. She snapped a photo of the ring search with several people in the swampy pond as the couple watched in despair.

The search turned up empty. Dixon is now ring-less and still making payments for the stone, Kansas City Star reported.

“It’s been a roller coaster of emotions, to be honest,” Salas told the newspaper on Monday. “Honestly, I’m happy and excited that we’re finally engaged. Just sad I don’t have a ring to show for it.”

The couple is planning on getting married on Oct. 21 and said they are still “trying to figure it out.” A GoFundMe page was created to help the couple replace the lost ring.

“I know God will work everything out,” Salas said. “We’ve kind of laughed at it, too. Gotta make fun of it, somehow.”