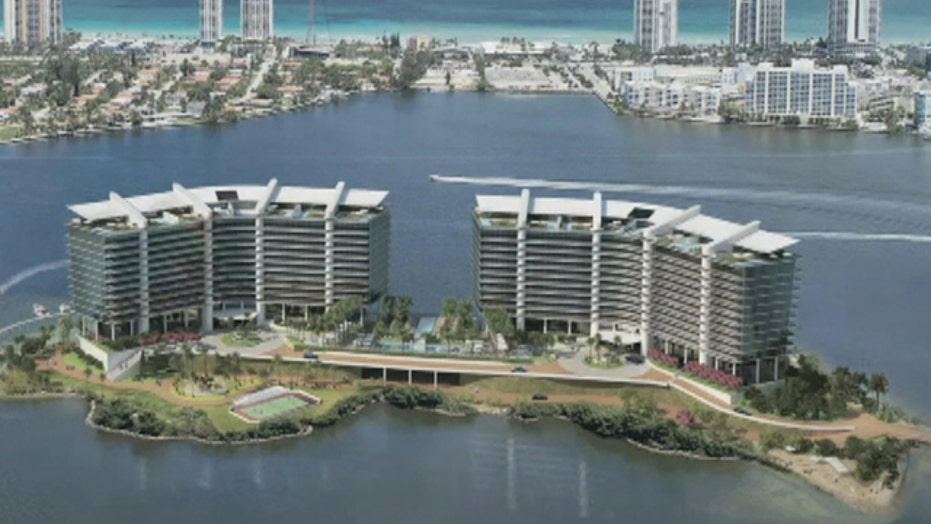 MIAMI, Fla. – It’s millionaire vs. millionaire in Aventura, Fla., where the residents of one exclusive island are fighting a developer's plans for another.

And the deciding factor for who wins could very well be a “phantom sidewalk.”

Developer Gary Cohen’s private island had been up for sale three years ago for $50 million, but he found no takers for the last remaining undeveloped coastal property between Boca Raton and Miami. Now, it is on to Plan B for the 8-acre island, which is barren save for some scrub brush and idle construction equipment.

Cohen wants to scrap the idea of selling to a single homeowner and instead build two, 16-story condo towers, each with 160 units. The cheapest condos would start at about $2 million and feature top-notch amenities, like private elevators. The island’s views are spectacular, it’s only accessible to the mainland by one road and there would be plenty of room for yachts at the planned marina. It’s pure South Florida.

But the development is currently frozen -- thanks to a court injunction -- in what is a uniquely, rich battle of wills. To get to the proposed condo towers, residents would have to traverse a neighboring island, where about 20 owners of homes that sell for $5 million and up are not keen on turning their own exclusive turf into an easement for the neighbors.

And here is where that “phantom sidewalk” enters the story. The original deal with the City of Aventura required Cohen to install sidewalks along the road leading through the homeowners’ island, if the adjacent island was to ever become multi-family. That sidewalk was never built.

One way for the developer to now get that sidewalk built -- and move on with what could be a very profitable condo project -- is to persuade the existing homeowners to sell back several feet of their lots, to make space for the sidewalk. But the homeowners aren’t selling, viewing the sidewalk as their magic bullet to kill the condos.

So far, two judges have sided with the homeowners. Cohen is now appealing to Florida’s 3rd District Court of Appeals.

That hearing is in January.

And for now, South Florida’s most valuable, undeveloped waterfront property sits in limbo.