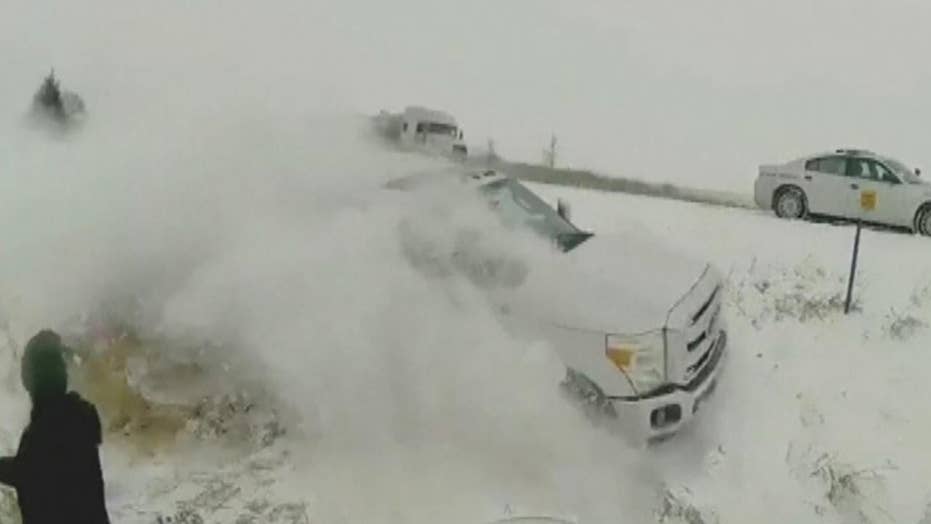 A state trooper helping drive in crash on Interstate 80 near Council Bluffs barely missed being hit by an out-of-control truck on the slick interstate.

A state trooper in Iowa had an extremely close call on Friday after a truck lost control on a snowy highway and almost struck him while he was responding to another accident.

The Iowa State Patrol said on Twitter the incident happened along Interstate 80 near Council Bluffs, located in the western part of the state.

"If you have to be out driving during inclement weather -- slow down and be aware of the road conditions," police said.

A dashcam video of the incident dubbed "shocking" by the state patrol showed the state trooper and another person surveying the damage from an earlier crash along the interstate.

As the two are walking around, another truck loses control on the slick interstate and barrels into the crash scene, barely missing the trooper and another man.

Iowa State Patrol said that the driver of the delivery truck, the state trooper, and occupants of the pickup truck that lost control were not seriously injured in the crash.

Between 8 a.m. on Friday and 8 a.m. on Saturday, officials said that Iowa State Patrol responded to 371 total calls for service, including 150 crashes and 221 motorist assists as winter weather created dangerous driving conditions.

The National Weather Service issued a blizzard warning on Saturday for the northwestern quarter of Iowa, and winter storm and weather advisories for most of the other parts of the state as the storm moved through.

The storm system began moving through the Plains and Midwest on Friday, leading to trouble at airports in Chicago and Kansas City and on area roadways.

In Nebraska, the winter storm that pummeled the state Friday was blamed for at least one death on Interstate 80, the Nebraska State Patrol reported Saturday. The patrol said the driver was killed Friday when the pickup he was driving spun out of control, crossed the median and slammed into a semitrailer.

Nebraska troopers responded to more than 200 weather-related incidents across the state. Most of those were to assist stranded motorists, but 55 were crashes, the patrol said.

The system eventually moved to the Northeast by Saturday evening, ushering in bitterly cold air behind it.